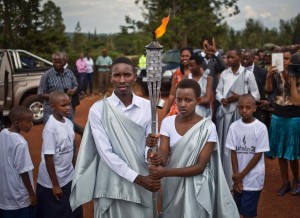 The arrival of the symbolically labelled ‘flame of remembrance’, ‘kwibuka 20’, to Camp Kigali in Nyarugenge district on Sunday, March 30th, marked a crucial milestone in national preparations for the 20th anniversary ceremony of the brutal mass murder in 1994.

Nyarugenge is the 28th stop on a nationwide tour of the torch, which has lasted more than two months.

According to Rwandan officials, the flame will be transferred to the Kigali Genocide Memorial – where it began its journey earlier in the year – on April 7th to officially commence a series of activities to mark the genocide, which claimed the lives of an estimated 1 million people.

The assassination of President Juvenal Habyarimana of Rwanda acted as a tipping point for full blown conflict in the long standing rivalry between the two main ethnic groups of the country – the Hutus and the Tutsis.

Rwandan security forces and a Hutu tribal militia, known as the interahamwe, embarked on a rampageous slaughter of Tutsis in the country. Reports indicate a few people from the Twa ethnic group, as well as some Hutus sympathetic with the Tutsis, were among the dead.

The 100-day long fatal assault, which reportedly claimed up to 1 million lives, was eventually ended by the Rwandan Patriotic Front (RPF) headed by the country’s current leader, President Paul Kagame.

In the aftermath of the bloody episode, many of its perpetrators moved to the Democratic Republic of Congo to escape the arms of the law. However, the Rwandan government has reportedly attempted to apprehend and prosecute many of the main leaders of the genocide.

The genocide inevitably led to the destruction of several Rwandan institutions, including the courts. This reportedly influenced the creation of two other judicial organs to support Rwandan courts hear the numerous cases.

Reports indicate that before the traditional ‘gacaca’ courts were closed in 2012, following widespread criticisms of the government’s involvement in the proceedings, millions of suspects had been tried.

Since its inception in 1994, the United Nation’s International Criminal Tribunal for Rwanda has heard over 60 cases. Reports indicate that the tribunal is set to be closed in December this year – having extended its original mandate by more than a decade.

Meanwhile, several other Rwandans implicated in the 1994 genocide have been tried in many countries across the world.

Although President Kagame is considered a hero by the international media for his role in putting an end to the wanton killing spree, many Rwandan dissidents have accused the government of imposing authoritarian restrictions on freedom of speech and opinion – especially in relation to the genocide.

Critics claim a majority of the RPF’s opposition are either in exile or incarcerated in the country.

Many commentators have reasoned that the international community may be turning a blind eye to these reports due to the government’s impressive economic initiatives, which seeks to transform the east African nation into a middle-income economy by 2030.

Photo by Ben Curtis/AP: The flame of remembrance on procession in Kirehe district, Uganda.