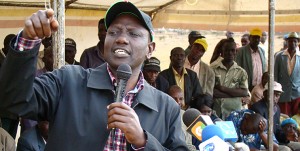 The Government of Kenya has offered Sh3 million to the families of the victims of the Likoni church attack to cover the cost of their medical bills and funerary rites.

Vice president, William Ruto, during a visit to the scene of the attack on Sunday, March 30th, along with other top state officials, highlighted the need for all religious groups to unite in the fight against terrorism in Kenya.

He also reiterated the controversial order by several top state officials for the police not to hesitate in using their firearms in the protection of civilians and state property.

The Star newspaper quotes the deputy leader explaining that, “We have given all our security men and women permission to use their arms well whenever Kenyans lives are being threatened. Terrorists must face equal force to the one they are using to terrorise Kenyans.”

He noted that Kenya’s security agencies are working to apprehend the terrorists behind the gruesome attack, “These people will not escape,” he said.

Reports indicate that since the incident, members of the church have failed to congregate over fears of a repeat attack.

On Friday, Kenyan security forces killed two suspects believed to have been involved in the raid on the church. One suspect reportedly escaped with bullet wounds.

The chief of police of Mombasa County, Robert Kitur,told the press that a loaded gun matching bullets found at the church was recovered from the two men and has been forwarded for forensic examination.

Reports indicate that the deadly attack was executed by members of the al Hijra terrorist group under the orders of a top al Shabab commander.

According to a report by Shabelle Media Network, investigators from the Somali National Intelligence Service have revealed that the al Hijra hit squad behind the incident were directed by a well known terrorist, Ahmed Iman Ali, who reportedly sneaked into Kenya in 2013 after some years in exile.

The intelligence report also notes that terrorists have shifted their focus to churches in Nairobi and Mombasa.

Since the deadly siege on the church, road blocks have been set up on several streets in the coast. Officials have also revealed plans of retrieving illegal weapons and embarking on a campaign to stamp out cells of terrorist gangs.

Photo by www.isbadal.com: The deputy leader of Kenya, William Ruto.