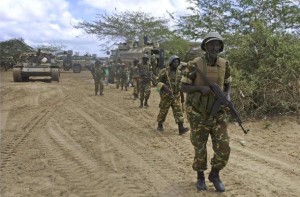 Islamic militant group, al Shabab, have killed up to eleven soldiers and injured many more in a failed attack on a top hotel in Buulo Burte, Beledweyne in the Hiran region of southern Somalia – one of the areas won from the terrorists last week by the Somali army and African Union in Somalia (AMISOM) forces.

Reports indicate that the attack occurred at about 2:00 am local time, but gunfire lasted for up to five hours afterwards.

According to AMISOM spokesman, Colonel Ali Adan Humad, a car sped past a road block near the hotel and officers reportedly opened fire on the car, “but it did not stop and then it exploded when we had our troops gathering.”

Information about the incident has reached the outside world at a very slow pace reportedly due to communication difficulties in Hiran. However, there are still several contradictory claims about the incident.

While some sources have put the death toll at about eleven to twenty, other sources say less than ten officers were killed. Nevertheless, all have confirmed that both Somali and Djiboutian soldiers are among the dead.

Col Humad has disclosed that Col. Muhamud Amin, the commander of the Hiran region, is one of the casualties.

About twenty officers are also reported to have been injured by the explosion.

While there are some reports that some terrorists have been captured alive, officials say all the attackers were killed.

The hotel targeted was reportedly housing AMISOM and Somali forces who have, since the beginning of this month, been conducting an offensive to liberate areas in southern and central Somalia, which are still considered al Shabab’s strongholds.

Almost ten towns have been liberated from the terrorists in less than two weeks. Many pundits speculate that this may be why the terrorists have carried out many desperate attacks against the government recently.

The spokesman for al Shabab, Adbiaziz Abu Musab, who confirmed that his group is behind the attack, also claimed that the terrorists are still in control of parts of Buulo Burto.

Buulo burto was reportedly one of the most important bases for al Shabab in the region. Reports indicate that due to it strategic location at a crossroad between several towns in the region, the terrorists had stationed supply and communication centers in the town.

Meanwhile, the Special Representative of the Chairperson of the African Union Commission (SRCC), Ambassador Mahamat Saleh Annadif, has condemned the attack and noted that it will not deter AMISOM from its mission of dislodging the terrorists from Somalia.

He also extended his condolences to the Djiboutian and Somali contingents, “AMISOM today stands with the fallen soldiers, these are some of the inevitable setbacks that we encounter as we fight to purge Somalia of the terrorists,” he said.

The President of Somalia, Hassan Sheikh Mohamud, has also invited the country’s international partners to assist in the efforts to stabilize the newly reclaimed towns.

He noted that residents of these areas would receive “an immediate peace dividend in the form of food aid and humanitarian assistance” before the creation of local administrative units.

Reports indicate that ministers are currently on a tour of the liberated areas to assess the humanitarian and infrastructural needs of the people. The Somali government has also reportedly began distributing food aid to some of these areas.