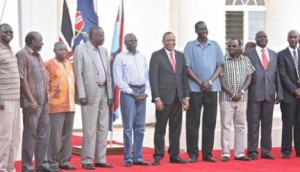 A High Court in South Sudan, on Wednesday, ordered the repatriation of seven political detainees released to Kenya back to Juba to stand trial.

According to a report by Eye Radio Juba, the ex-state employees were summoned after the head of the prosecution team, James Mayen, questioned the circumstances behind their release.

In January, the South Sudanese government released and transferred the seven politicians over to Kenyan authorities after the Justice Ministry reportedly cleared them of any involvement in the alleged coup d’état in December 2013.

The seven politicians and members of the leading Sudan People’s Liberation Movement  – identified as Deng Alor, Cirino Hiteng, Kotsi Manibe, John Luk, Madut Yel, Chol Tong Mayay and Geir Chuang – have been in the custody of the Kenyan government since then and numerous calls have been raised for them to participate in the negotiations between the warring parties.

Many observers had criticised the fact that the South Sudanese government has decided to prosecute the other four ex-state employees in custody despite the ongoing talks in Addis Ababa.

On Tuesday, during the opening of the trial of the four politicians (Pagan Amum Okiech, Oyay Deng Ajak, Ezekiel Lol Gatkouth and Majak D’Agoot Atom), the prosecution levelled nine charges against the group – including treason and subverting the ruling government.

Reports indicate that the judges presiding over the case have adjourned the trial of the four politicians until March 17th, when their seven colleagues are also expected to appear in court.

The prosecution has, however, affirmed President Salva Kiir’s remarks that Riek Machar, Taban Deng Gai and Lado Gore, will stand trial once they are apprehended.

Despite the ceasefire agreement in January, violent clashes have been reported in several states in South Sudan.

The United Nations estimates that nearly 1 million people have been displaced from their homes and several thousands killed since the civil unrest was ignited late last year.

The four month long wild clashes has left a dire humanitarian crisis in its wake, according to several aid organizations.

The United Nations and African Union have both deployed investigative teams to the devastated country to dig into reports of widespread human rights violations.

Meanwhile, heads of States of Inter-governmental Authority for Development (IGAD) member countries are scheduled to meet in Addis Ababa on Thursday to finalize plans for the deployment of a much awaited peace keeping force to South Sudan.

Photo by Africa Review: President Uhuru Kenyatta of Kenya and the seven politicians after their arrival in Addis Ababa in January.