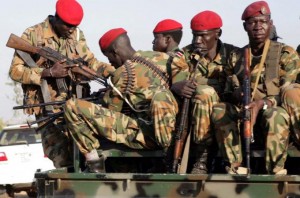 Residents of Juba were forced to stay indoors early Wednesday after fighting erupted in a renowned military barrack near Juba University in Giyada area.

According to local reports, gun fire and heavy explosions rang in the barrack known as Geida, which reportedly houses the South Sudanese presidential guard.

Reports have confirmed several casualties, but there are conflicting claims about the actual number of soldiers dead.

Army spokesman, Malak Ayuen, has told the press that the violence is the result of a payment disagreement with the army payment committee.

“What happened was a misunderstanding among the commandos and it ended in their unit,” he said.

He described it as an ‘isolated incident’ and noted that the officers behind the outburst will be charged.

According to Radio Tamazuj, the shoot-out erupted when the leader of the ‘commando’ unit, Brigadier Gatwech Gai, attempted to forcefully secure the salaries of some soldiers who are stationed at the United Nations Mission in South Sudan’s (UNMISS) base in Juba.

The group is reported to have opened fire on the payment committee after they declined to give the soldiers their salaries, reportedly because their names weren’t on the payroll.

Reports further indicate that several soldiers were in a long queue to collect their salaries when the incident occurred.

Local sources say the brief outburst has led the army to position road blocks on strategic highways across the city.

Geida is reportedly the same scene where violence erupted in December 2013 before spreading throughout the nation.

Many observers have expressed concerns about reports of violence in the barrack, reportedly the heaviest shoot-out in the capital since rebel factions were driven out.

On Tuesday, the VOA reported that the Inter-governmental Agency for Development (IGAD) has revealed that East African nations are ready to deploy troops to South Sudan.

The South Sudanese government has requested troops to protect oil fields and vital building in Juba.

The lead mediator in the ongoing peace talks, Seyoum Mesfin, echoed the rationale behind the request saying “The parties would be tempted to fight for control of these resources, and if this is protected by this force that definitely will further stabilize the situation in South Sudan.”

He further disclosed that IGAD is in discussions with the African Union and United Nations to draw up the details of the force to be deployed.

Meanwhile, IGAD has revealed that the peace talks in Addis Ababa have been adjourned for two weeks to resume on 20th March.

The United Nations Special Deputy Representative and Humanitarian Co-ordinator to South Sudan, Tony Lanzer, has warned that there is a looming humanitarian disaster in South Sudan as supplies continue to dwindle rapidly and there is no internal production.

Mr. Lanzer has therefore requested that the warring parties consent to a “real” ceasefire agreement, which will be in effect from March to May – when annual floods are expected in many areas of the country.

Currently, almost 1 million civilians have been displaced by the violence in South Sudan and a large percentage of them are reported to be in makeshift camps and other temporary hide-outs across the nation.