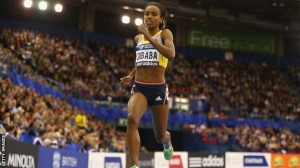 IAAF Atheletics has reported that with a race pattern strikingly similar to the one she used when running 3:55.17 in Karlsruhe, the race started out reasonably fast and ended even quicker.

Dibaba covered the final 2000m in 5:27.95 – more than two seconds quicker than the world indoor record for that event.

Her winning time is also an outright African record, bettering the 8:23.23 set outdoors by Edith Masai in 2002. It is the fastest performance indoors or outdoors since 1993. Only three women – Chinese trio Wang Junxia, Qu Yunxia and Zhang Linli – have ever run faster.

To underline the magnitude of Dibaba’s performance, the world indoor champion over the distance, Hellen Obiri, improved her PB by six seconds to finish second with a Kenyan indoor record of 8:29.99, but still could not get within 13 seconds of the winner.

The top nine finishers, seven of whom dipped below 8:50, all set indoor PBs.

Dibaba’s recent exploits also changed the landscape for former compatriot Abeba Aregawi. The world 1500m champion ran 3:58.40 here last year to just miss the world indoor record by 0.12. Today she fulfilled her ambition to run faster than that, but her 3:57.91 wasn’t quite a world record as it was more than two-and-a-half seconds slower than Dibaba’s record-breaking run in Karlsruhe last Saturday.

Nevertheless, Aregawi was content with setting a European indoor record. At half way, Aregawi was almost a second ahead of Dibaba’s record pace, but despite a final 400m of 61.5, she was unable to match Dibaba´s storming 59.6 for her final two laps five days ago.

Of course Dibaba’s world record and Aregawi’s second-fastest performance of all-time were the absolute highlights of the evening, but there were many other highlights for the almost 9000 fans in the stands.