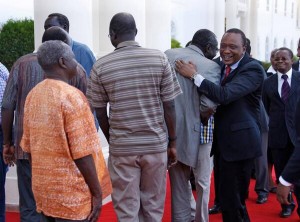 The former deputy President of South Sudan, Reik Machar, and six other former employees of the government could be tried for treason for their role in the alleged coup d’etat which led to the outbreak of violence on December 15th, 2013.

South Sudan’s Minister of Justice, Paulino Wanawilla Unago, on Tuesday, revealed that after completing investigations into the cause of the civil unrest in South Sudan, the government has concluded that four of the former state employees in custody are guilty.

Meanwhile, the other seven former state officials in custody have been released and transferred to Kenya.

President Uhuru Kenyatta has said that member countries of the Inter Governmental Agency for Development (IGAD) continue to discuss “how best to establish the urgently needed monitoring and verification mechanism provided for in the Cessation of Hostilities Agreement.”

The Kenyan leader also called on both sides of the conflict to “silence their guns. Let food, water and medicine reach those who most need them. Let those in the camps return to their homes.”

Although President Salva Kiir had hinted at extending a pardon to his former deputy, who was fired less than 10 months ago, reports have suggested that Riek Machar and two former state employees currently in hiding may be tried in absentia.

It is unclear how this revelation would go down with the rebels, who had made the release of their 11 colleagues in custody a precondition for the peace talks to proceed.

Mr. Machar and his supporters have debunked claims that an attempted coup d’etat led to the outbreak of violence in the world youngest nation last year. According to them, this is a ploy by the nation’s leader to rid himself of his opponents ahead of the country’s 2015 presidential elections.

Meanwhile, in South Sudan, reports have emerged of isolated fighting in the oil-rich Unity State. However, both sides continue to accuse one another of sparking off the clashes, which have been reportedly ongoing since a day after the ceasefire agreement was signed.

During a visit to Malakal, Upper Nile State, on Tuesday, the United Nations Deputy Relief Coordinator, Valerie Amos, revealed that many civilians continue to seek shelter in United Nations compounds, underscoring the high level of security threat many are still living under.

Members of relief organizations working in South Sudan say there is a dire need for humanitarian assistance in the world’s youngest nation. There have also been reports of potential outbreaks of diseases in crowded refugee camps across the nation.

Over half a million people are estimated to have been displaced by close to 6 weeks of fighting in South Sudan, and thousands are believed to have been killed in ethnic based clashes between the Dinka and Nuer people.

Medicins sans Frontieres (MSF) has disclosed that several health facilities have been forced to shut down across South Sudan due to the violence, putting pressure on the few open facilities.

The organization, which was also forced to shut down its operations in Bentiu and Malakal in the heat of the conflict after they were attacked and looted, says it is in need of medical supplies to continue to provide basic medical assistance to patients lined up at its stations across the nation.