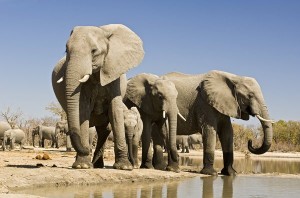 For many years, the Selous Game Reserve in southern Tanzania was home to one of the largest population of elephants on earth.

This sprawling reserve (approximately 21,000 miles), which has since been recognized as a UNESCO World Heritage Site, is considered one of the main attraction for tourists visiting the east African country, besides the famous Serengeti.

But in the past few years, due to increased poaching, the Selous Game Reserve has become the center of a much heated public debate.

According to pundits, due to the demand from Asian countries such as China (which has developed economic ties with Tanzania), the incidence of elephants being killed for their tusks has increased almost uncontrollably.

This is a new record for the lowest number of elephants in the reserve, beating the previous record of about 22,000 in 1991.

In response to that crises, the Tanzanian government had initiated a conservation program, which was only terminated in 2013.

Attempts to kick-start a new nationwide anti-poaching campaign in response to these reports of rampant poaching has, however, not met much success.

Last year, the government was forced to call-off its “Operation Tokomeza”, after it was revealed that officers had committed several human rights violations while on duty.

This eventually led the Tanzanian government to fire four ministers, including the Minister of Tourism.

Besides poaching, plans to build a uranium mine adjacent to the Selous Game Reserve has also been a source of worry for environmentalists.

The Tanzanian government, however, insists that it plans to capitalise on its uranium reserves around the famous wildlife park, which pundits say will make Tanzania one of the world’s leading producers of the silvery-white metal.

In opposing the project, several environmental protection groups have argued that it would be impossible to control poisonous radioactive waste from spreading into water bodies in the reserve, ultimately affecting the animals.

The Selous Game Reserve is set to be further affected by the construction of a dam, the Stigler’s Goerge multi-purpose dam, in Tanzania’s largest river basin, the Rufiji, which runs through the reserve.

Efforts to Save the Reserve

Several organizations have initiated public campaigns against these projects, which they say will severely affect the Selous Game Reserve.

Mantra Tanzania Limited, one of the firms which has secured a uranium mining license in parts of the Selous Reserve, has launched an anti-poaching campaign to curb the rise of the disturbing illegal trade in ivory.

On 25th January, Rainforest Rescue launched a campaign aimed at forcing Tanzanian authorities to stop its projects in the Selous Reserve. In just two days, the group’s letter had gathered over 50,000 signatories.

Reports suggest that in 2012, the United Nations World Heritage Committee accepted a request from the Tanzanian government to redraw the boundaries of the reserve to carve out the portion which will be dedicated to its uranium mining operation, the Mkuju River Uranium Project.

The committee reportedly acquiesced to the application from Tanzanian authorities based on an agreement that the project will be carried out under specific conditions it approves.

However, several opposition has been generated against the project by individuals, religious groups and non-governmental organizations.

In what can be considered a high point in the campaign against the uranium mining project, in 2011, uranium-network.org delivered a petition to the Tanzanian Embassy in Germany in which about 20,000 signatories expressed their support for the project to be halted.

Although officials continue to insist the project will take only about 1% of the reserve’s land, it has nonetheless attracted severe criticism from various sections of the public.

Reports have also emerged that East Africa Resources Ltd has obtained license to mine uranium within the Selous Reserve. The company is reported to have already commissioned an environmental assessment into the project.

Meanwhile, the Tanzanian government has revealed that it will co-operate with countries in Asia and Europe, where the ivory won from these despicable poaching raids are destined, to raise awareness against illegal trade in the precious material.