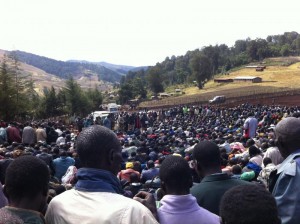 For thousands of years, the Sengwer people have found home in the Embobut forest, western Kenya, tucked away in one of the country’s most important natural reserves, the Cherangani Hills.

But in the past 7 years, the tribe who traditionally engaged in hunting and gathering, say the government is forcibly and illegally evicting them from their ancestral land – an act considered abominable in many cultures.

The fact that the Sengwer people have attempted to preserve their traditional way of life up until this age adds to the severity of their displacement.

According to reports, although the government of Kenya have attempted to evict the Sengwer people from their ancestral land before, the new drive to evict them – which has come with much zeal – follows the commencement of the Natural Resource Management Project, which is being done in collaboration with the World Bank.

Critics of the move have noted that not only does it violate Kenya’s 2010 constitution, it also goes against several international laws on human rights and also the World Bank’s policies towards indigenous people.

Attempts to get the World Bank to intervene to prevent the eviction of the Sengwer people from their land has so far been futile. While the bank has acknowledged that the claims of the Sengwer people had tenable grounds and has commissioned an investigation into the issue, it has been silent as Kenyan authorities embarked on the recent evacuation exercise.

When Kenya Forest Service officers, backed by the police, began evicting and burning homes in the Embobut forest in the first week of this month, reportedly after a 21-day deadline expired, many people from the Sengwer ethnic group accused the officials of acting irrationally.

According to them, claims that settlements in the Embobut forest are threatening one of the nation’s five main water catchment area only surfaced after several internally displaced people began relocating to the forest in the past few years.

They have further called on the government to make a distinction between the indigenous people of the forest and the new arrivals, who have been described as “squatters.”

Last year, the Eldoret High Court issued an injunction against the evacuation of the Sengwer people from their ancestral land. And in light of reports of the impending evacuation exercise this month, the court issued an order to the police to arrest anyone who violates its injunction. But critics say the police have stood by, and even supported forest service officials in forcibly evacuating people from their homes in the forest and destroying their properties.

Kenyan lawmakers seem to be split on the issue. While some assert that the forest dwellers must be given more time to evacuate rather than be thrown out, others say the authorities are in their right not to tolerate civil disobedience in protecting the interests of the larger population.

Last year, President Uhuru Kenyatta promised to compensate the forest dwellers for having to relocate, but many say they have not received any sort of compensation.

According to reports, nonetheless, about Sh400,000 has been distributed among 2,874 of the forest dwellers. However, local media sources estimate that in total up to 15,000 people may be living in the Embobut forest.

Meanwhile, Forest People’s Programme, along with over 40 other local and international environmental protection and human rights groups have issued a statement decrying the forced evacuation of the Sengwer people from their ancestral land.

“It would violate the human rights of the indigenous Sengwer/Cherangany peoples, and their right to the customary sustainable use and conservation of biodiversity, if they are forcibly evicted from their ancestral lands and deprived of their own indigenous means of subsistence integral to their forest life, identity, their characteristic sources of food, water, health and shelter and to their cultural survival as a people,” a joint statement from the groups argue.

The United Nations Special Rapporteur on the rights of indigenous people, James Anaya, has also condemned the move by Kenya Forest Service officials.

Quoting the United Nations Declaration on the Rights of Indigenous Peoples, he says no form of relocation should occur “without the free, prior and informed consent of the indigenous people’s concerned and after agreement of fair and just compensation and, where possible, the option of return.”

In light of reports that Kenya Forest Service officers plan to extend the exercise to other settlements in the Cherangani Hills, such as Kapolet, Lelan and Kamoloka, critics have called on local and international groups to raise awareness about the exercise in a bid to coerce the World Bank and Kenyan officials to stop the project.

Meanwhile, Forest People’s Programme has begun a fund raising campaign to support the legal battle of the Sengwer and other people living in the Cherangani Hills.

Photo by Justin Kenrick: Residents of Embobut forest being told about the impending evacuation exercise.