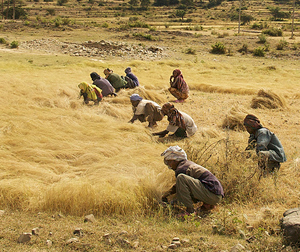 Teff grows predominantly in Ethiopia, as well as Eritrea, and has been one of the basic staple food for people of these nations for thousands of years.

Teff is a small grain, about the size of a poppy seed, it comes in a variety of colors, from white and red to dark brown.

The name Teff is derived from the Amhraic word “Teffa”, which means “lost”, highlighting the minute size of the grain.

Teff generally thrives in waterlogged soils, making it a dependable staple wherever it is grown. No matter what the weather, teff will likely survive, and is also relatively free of plant diseases compared to other cereal crops.

In Ethiopia, one of  the main uses of teff is to make “injera”, which looks like flat bread.

But, after some years of studying teff, scientists say this tiny seeds are the world’s next “big super food.”

According to reports, the grain can substitute for wheat flour in anything from bread and pasta to waffles and pizza bases.

Like the Andean grain, quinoa, teff’s superb nutritional profile offers the promise of new and lucrative markets in the west.

Teff has an excellent balance of amino acids, it is also gluten free and high in protein, calcium, and iron.

The rapid rate of immigration from Ethiopia and Eritrea is considered one of the main factors that has led to the introduction of teff to the western world. Most people have described the need for injera among Ethiopian and Eritreans as an addiction, therefore as the number of these immigrants have grown in the western world, so has the supply of teff.

Royco International is one of the main distributors of teff in North and South America, as well as in Australia, New Zealand and some parts of Asia. The company introduces teff as an exciting alternative to flour in pancakes, snacks, breads, cereals and many other products, especially those created for the gluten-free market.

Although the demand for teff in the international market is currently booming, exporting teff is banned by the Ethiopian government.

According to United Nations Food and Agriculture Organization’s 2013 report, the export market is currently very small (less than 0.5 percent of production) and this is mainly due to the ban on teff export.

But many observers say this grain may be the next top earning export for Ethiopia and Eritrea in the coming years.