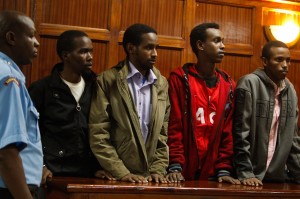 The suspects are reportedly being accused of terrorism under Kenya’s Anti-Terrorism law.

Two of the suspects have reportedly also been charged for possessing false Kenyan identification documents.

The suspects are reportedly accused of indirectly enabling the carnage, which claimed close to 80 lives, by providing shelter and other forms of assistance to the attackers.

Today, the court listen to the testimonies of two witnesses present at the Westgate Mall when the attack commenced.

Stephen Juma and Patrick Otwane told the court about their experiences on the eventful day of this attack.

Both men revealed to the court that they had not been told to, and could not identify the attackers.

“I have also never seen them before,” Mr. Juma told the court.

After hearing testimonies from only two of the three witnesses lined up, the case, which is reportedly to determine if there is substantial evidence to prosecute the four suspects, was adjourned till Thursday, January 16th.

The four suspects had sought to be released on bail last year, but the court turned down their request.

Although dozens of suspects are reported to have been arrested after the headline-grabbing attack, only these four men have been charged.

A few weeks ago, the New York Police Department, which was remotely connected with the investigations, revealed that only four men carried out the attack on the Westgate Mall, although it took authorities up to four days to quell it.

The report also suggested that, contrary to popular understanding of the turn of the event, the four suspects may have actually escaped from the mall, rather than died in it.

The NYPD backs this speculation, which has been repugned by Kenyan security officials, with the fact that the suspects were last seen on security cameras twelve hours after the attack commenced.

Kenyan authorities have, meanwhile, revealed that four charred bodies have been recovered from the site of the attack and are undergoing identification.

Only the names of two of the four attackers are known thus far – Mohammed Abdinur Said and Norway-born Hassan Dhuhulow – and both are Somalis.

There have been other speculations that the death toll – set at 67 – may actually be close to 100, as more bodies are believed to have been trapped under the sweeping rubble.

al Qaeda-linked Islamist militant group, al Shabab, have claimed responsibility for the attack, saying it is meant to coerce Kenyan authorities to withdraw from peace-keeping missions in war-torn Somalia.

The Islamist militant group have also revealed that the four men who carried out the attack were part of a suicide squad – somewhat confirming reports that the attackers may have died in the attack.

Photo: A police officer stands guard as the four suspects stand in the dock as they appear for a second bail hearing at a courtroom in Nairobi, Kenya, 11 November 2013. (EPA/Daniel Irungu)