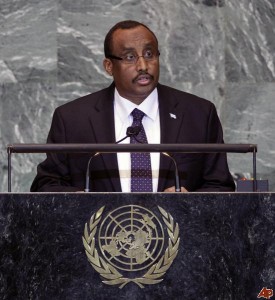 The elections, which was broadcast live on local television and radio stations, saw both candidates unable to obtain the constitutionally required two-third majority in the first rounds of voting, eventually leading to a run off.

Mr. Abdiweli was declared the winner and new president of Puntland after getting 33 votes, against the incumbent President Mohamed Farole, who polled just 32 votes.

Abdiweli Mohamed Ali, 48, served as the prime minister of Somalia between 2011 and 2012. He also served shortly, as member of parliament in the federal parliament of Somalia.

The sixty-six lawmakers who voted in this presidential elections were all elected last month by clan heads of the region. Puntland, which hold about a third of Somalia’s geographical area, is home to about 2.5 million people.

The region was declared an autonomous state in 1998 after the outbreak of the Somali civil war in 1991. Although Puntland authorities insist the state is part of Federal Somali State, they aren’t seeking total independence from the war-torn country, unlike Somaliland, their secessionist neighbor to the west.

Meanwhile, Somalia’s Prime Minister Abdiweli Sheikh Ahmed has congratulated the newly elected president of Puntland Abdiweli Mohammed Ali on his elections. The prime minister of Somalia also hailed Mohamud Faroole, the outgoing president of Puntland, as a strong leader whose service and hard work for his people will be remembered.

According to Prime Minister Adbiweli Sheikh Ahmed, “These elections were possible thanks to the improved security and stability in Somali and I congratulate Puntland on ensuring that the elections were peaceful, free and fair”.

“This is a great day for not just Puntland but all of Somalia. Puntland is leading the way on the development towards a federal Somalia and serves as an example to other states,” he added.

Photo: The newly elected president of Puntland addressing the UN when he was prime minister of Somalia in 2011. (AP/Mary Altaffer)