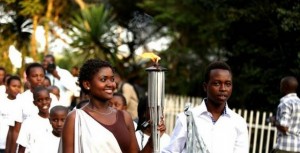 The government of Rwanda on Tuesday officially commenced a series of activities to mark the 20th anniversary of the 1994 genocide with a torch lighting ceremony at the Kigali Genocide Memorial grounds.

Many survivors, relatives of the deceased and government officials attended the ceremony where the flame was lit in traditional Rwandan style.

The torch is set to be taken on a nationwide tour by young people ahead of the official genocide memorial day, April 7th.

Speaking at the ceremony, the Foreign Affairs Minister of Rwanda Louise Mushikiwabo invited the world to join Rwanda in marking this milestone in her timeline, dubbed “Kwibuka 20”.  To this end, a website (kwibuka.rw) has been launched to provide everyone interested in participating in the ceremony with information.

“It is a time to recommit ourselves to the simple but powerful idea: Never Again. Not just for Rwanda, but for the world. But for Never Again to be a reality – and not just words — Never Forget must also be our creed,” she said.

In April 1994, a plane carrying Rwandan President Juvenal Habyarimana and Burundian President Cyprien Ntaryamira was shot down in Kigali, leading to the death of both men.

This incident sparked off a violent reaction in the nation, during which a loosely connected Hutu militia and rogue security forces attacked and killed thousands of Tutsis, and some Hutus who weren’t allied with their cause.

Up to a fifth of Rwanda’s total population is believed to have been killed in this ethnic-based attack, which lasted about four months.

The mass murder spree was eventually ended by the current leading party, the Rwandan Patriotic Front (RPF), who were then considered a rebel group.

While the Rwandan people have always marked the day of the beginning (April 7th) and the day of the end (July 4th) of the genocide yearly, this year’s events are expected to have an extra significance.

Officials have revealed that the torch will eventually be returned to the Kigali Genocide Memorial grounds on April 7th. This will commence a series of activities including seminars, candle-light vigils and other activities to mark the tragic event in 1994.

Several pundits have blamed continental and international authorities for having failed to do enough to prevent the genocide.

The International Criminal Tribunal for Rwanda (ICTR), established by the United Nations Security Council, and the “Gacaca” courts, established by the Rwandan government, are believed to have prosecuted a majority of the people directly involved in orchestrating the genocide in 1994.

Under the leadership of President Paul Kagame, Rwanda has made several notable strides in rebuilding itself against the divisive effects of the genocide. While the government has been able to achieve a level of economic success, many opposition figures accuse the leading party of being essentially undemocratic.

Photo courtesy of the Rwandan Ministry of Justice.