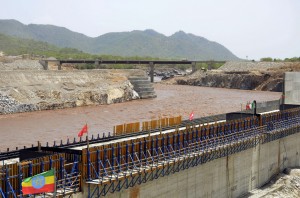 Ministers from Ethiopia, Sudan and Egypt are scheduled to attend a meeting in Khartoum today in an attempt to reach an agreement over the Grand Ethiopia Renaissance Dam (GERD).

This is the second time minsters from these countries are meeting in Khartoum over the GERD. At the first meeting last month, the ministers failed to reach a consensus after the Egyptian representative requested for a new study to be carried out by an international panel of experts from “neutral” countries.

The $4.3 billion GERD has been a point of contention between Ethiopia and Egypt since the project was still in its infancy– with Egypt threatening military action at some point. The conflict reached its peak in May when Ethiopia began diverting water from the Blue Nile as part of the GERD’s construction. Egyptian officials responded furiously, reminding Ethiopia of a colonial agreement which entitles Egypt and Sudan to the largest percentage of the Nile’s water as well as veto power over all upstream projects.

On their part, Ethiopian officials say the 19th century agreement is no longer binding. Last year, several nations along the Nile entered into a new agreement on how the fabled water is to be distributed—but Egyptian officials have failed to recognize this agreement.

Meanwhile, the Sudanese government have already given its approval for the construction of the GERD. Last week, an unidentified Egyptian official is reported to have criticized President Al Bashir for failing to critically study the recommendations of the panel of experts before giving his consent for the construction of the GERD. According to some commentators, President Bashir’s consent reveals his interest in acquiring cheap electrical power from Ethiopia upon the completion of the dam.

However, the panel of experts convened to assess the dam in June noted that analysis by Ethiopia into the dam’s impact is “very basic, and not yet of a level of detail, sophistication and reliability that would befit a development of this magnitude, importance and with such regional impact.”

The experts tasked Ethiopian authorities with conducting investigations into the structure of the dam, and considering the effects of its spillage or collapse on downstream nations. During the meeting this week, the ministers are expected to address Egypt’s demand for a new panel to be convened to assess the dam, and also discuss the recommendations put forth by the first panel earlier in the year.

Some commentators say the only way forward is co-operation. But it is unlikely the Ethiopian government will want to partner either Sudan or Egypt in the construction of the GERD, which has been hailed as being at the center of a new found ‘pan-Ethiopianism’.

Photo: A section of the GERD under construction.