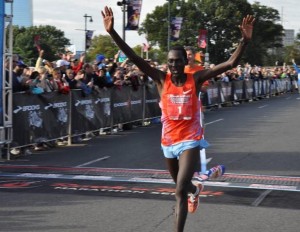 The Kenyan government and the International Association of Athletics Federations (IAAF) will, in January, begin construction of a drug-testing center in Nairobi in an effort to curtail doping among athletes.

This has emerged following a closed door meeting between three officials from the international Athletics body and Athletics Kenya at the latter’s offices in Nairobi.

“We don’t want publicity, we will inform people when the center is opened, but for now we are preparing to build the laboratory in the country,” Athletics Kenya boss Isaiah Kiplagat told the press.

“The center will serve Ethiopia, Kenya, Uganda, Rwanda and the central Africa region. This will reduce the cost and time it takes to get results whenever we take our samples to Germany or South Africa,” added Kiplagat.

IAAF president, Lamine Diack, had earlier promised to support Kenya and Jamaica in setting up testing centers. Both countries have recently received heavy criticism from the World Anti-Doping Agency (WADA) for their alleged lack of vigilance in combating doping among athletes.

Diack however defended the two during the 2013 World Athletics Gala, accusing WADA of singling out Kenya and Jamaica for their alleged inaction against doping.

Currently, most athletes in training camps within East Africa cannot access blood testing services due to their remote locations. Even those who are located in urban areas have to ensure that their blood samples reach the closest testing center in South Africa within 36 hours after collection.

Out of the 650 athletes tested in Kenya last year, 17 tested positive for performance-enhancing drugs including norandrosterone which is linked to the steroid nandrolone.

One particular top athlete, Mathew Kisorio, tested positive for a prohibited steroid after completing the 10,000 meter race in the 2012 Kenya Athletic Championships. He later admitted to be also using blood-boosting drugs saying the practice was fairly common in Kenya as it was encouraged by foreign athletics agents and doctors.

Athletics Kenya however claimed that some athletes failed the tests because they were on prescription medication prompting the IAAF to urge Kenyan athletes to seek counsel from sports doctors before taking any drugs. The Kenyan government also established a 12-man task force to investigate doping allegations from as early as 2012, the report is due in February 2014.

David Okeyo, secretary general of Athletics Kenya, admits that the local athletics body is concerned by the rising number of athletes caught doping, but continues to deny the extent of the problem.