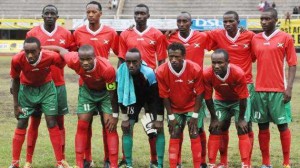 On Tuesday the Burundian national football team was detained at the Milele hotel in Kenya over unpaid bills.

The team is reported to have been preparing to leave the hotel, which is located in Nairobi’s South C ahead of a tough tie against Tanzania on Wednesday at the ongoing CECAFA Senior Challenge Cup, when management of the hotel refused to let them leave until they paid their bills.

The embarrassing situation is reported to have left the entire team frustrated. Meanwhile, the team’s coach Lofty Mohamed has threatened to send in his resignation.

“The coach is very furious; he does not want to talk to anyone. Everybody is taken aback and the whole team is disappointed. It all began when we were about to leave, everybody was ready but before we knew it, we were informed that we could not leave,” a source revealed.

According to Goal.com, while other teams have made their way to Nakuru, the Burundi team players are still in their hotel rooms, reportedly watching the match between Kenyan and Zanzibar.

The said hotel bill , which is supposed to be paid by the Kenyan Football Federation, is estimated to be around 3 million Kenyan Shillings and includes the cost of other teams like Uganda, Sudan and Eritrea, who all stayed in the same hotel.

Robert Asembo, the deputy chairman of the Kenyan Football Federation has called for calm, dismissing the whole situation as a misunderstanding between the hotel management and the team. He also revealed that the situation has been taken care of. “They (hotel) thought that the team is checking out, but they were meant to return after the Nakuru game. We have sorted the issue,” he noted.

Kenyan Football federation has revealed that it is running the tournament on a tight budget after the government failed to fulfill its monetary pledge to the federation.