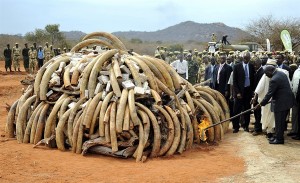 Githu Muigai, Kenya’s attorney general is urging the nation’s parliament to enact a new wildlife bill in an attempt to put the disturbing rise of poaching under control.

Speaking in a forum at the International Environmental Compliance and Enforcement meeting organized by the United Nations Environmental Programme (UNEP) headquarters in Nairobi, Prof Muigai called on lawmakers to pass the Wildlife Management and Conservation Bill before their Christmas break is due—“which is sometime by mid next month.”

Under the new law, poachers are expected to be meted stiffer punishments when caught. For many years environmental protection groups have criticized Kenya’s anti-poaching laws for not punishing poachers enough to deter them from killing hundreds of elephants and rhinos yearly.

According to Prof Muigai, the new law “is a great step forward in tightening the regulatory framework and in empowering the courts to give stiffer sentences than before. It represents to a greater extent a policy shift, a recognition that this problem does require a more serious approach from the criminal justice system.”

He also relayed the government’s plans to recruit about one thousand rangers to the Kenyan Wildlife Society (KWS) to join a newly formed elite anti-poaching unit.

Poaching has drastically increased in Kenya and other African countries in the past few years as the growing Asian middle class’ demand for ivory and rhino products continues to rise. The Kenyan government has responded by implementing various measures including increasing the number of rangers in the Kenyan Wildlife Service, creating an elite inter-agency poaching unit and partnering with regional and international groups to put up a concerted fight against poaching.

According to the Convention on International Trade in Endangered Species of Wild Plant and Flora (CITES), the illegal trade in plants and animals facing extinction amounts to billions of dollars yearly.

This, among other things, is the inspiration behind the UNEP three-day meeting in Nairobi, co-organized by the international Police Force Interpol.

Government officials, activists and several professionals are attending this event—which officially kicked off yesterday. The meeting is aimed at identifying the challenges facing countries in their conservation attempts and developing strategies to enforce the CITES treaty on endangered species effectively with assistance from the appropriate local, regional and international agencies.

According to pundits, the best ways to tackle this crime is through a co-ordinated effort which advocates curbing the trade at the beginning stage with the hunters, through to the sellers and buyers .

“The sharp rise in poaching in the past few years, in correspondence with increasing affluence in the far east (where most buyers are thought to originate from) proves that the increasing demand is the life-stream of this trade, and the trade would continue to thrive until the demand is addressed.” an unidentified KWS official explained.

Despite these commendable achievements, evidently more needs to be done. Many hope the new Wildlife Management and Conservation Bill, once enacted, will provide some respite to the rapidly dwindling numbers of elephant and rhino population in Kenya.