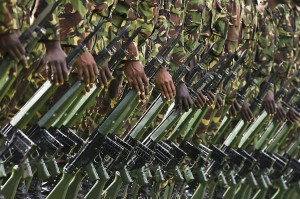 The Kenyan Army’s spokesman has cautioned residents of Southern Somalia to be on high alert for an impending attack on the region.

Major Emmanuel Chirchir is reported to have disclosed, via social media, that civilians should stay away from Al Shabab camps and roadblocks in Gedo, Mid Juba and Lower Juba as a “round of visitations” were expected.

In the past few weeks Al Shabab have come under sustained attacks. Following a foiled U.S Navy SEAL attack on a compound in Barawe and a missile strike on an Al Shabab commander in October, the Kenyan Army has conducted at least two operations targeting the terrorist group. Most notably, the airstrike on a rebel camp in Southern Somalia thought to have been the training ground of the Westgate gunmen.

A Kenyan military official is reported to have announced, after that operation on October 31st, that similar operations will be carried out in the near future.

Despite the efforts of the African Union’s Mission in Somalia (AMISOM), Al Shabab still control many rural communities in central and southern Somalia. Experts say communities that are unable to put up a fight against the militants are subdued and become a source of food and other supplies for the group.

AMISOM commanders have requested an additional 5,000 troops are deployed to increase their ability to combat the terrorist group.