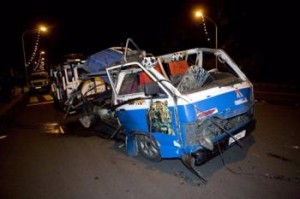 A bomb blast is reported to have killed four people in Segno Gebeya, western Ethiopia.

According to government spokesman Shimeles Kamal, the explosion occurred inside a minibus traveling in the region bordering Sudan on Tuesday night.

Officials say the incident is under investigation.

A series of attacks on many East African countries in the past few months have revealed the security vulnerability of these nations to terrorist groups.

According to a report in the Mail and Guardian, Ethiopian security officials had put the the country on high security alert after gathering evidence of an impending attack by Islamist terrorist group Al Shabab.

In the joint statement by the Ethiopian National Intelligence and Security Service (NISS) and the Federal Police, the public were advised to report any suspicious activities to the Police. Hotel staff and landlords were also cautioned to verify the identity of anyone who visits their properties.

There is contention among pundits if the bomb blast came before or after the warning by Ethiopian officials.

It is also currently unclear if the attack was carried out by Al Shabab since no one has owned up to it.

Al Shabab have claimed responsibility for most of the attacks on East African nations recently, rationalizing them as their way of pressuring these nations to withdraw their troops from the African Union’s (AU) AMISOM peace keeping mission.

While it may seem Ethiopia has been spared from deadly attacks as the one on the Westgate mall in Nairobi in September. The Ethiopian National Intelligence and Security Service recently revealed that they have thwarted several terrorists plots in the past few months.