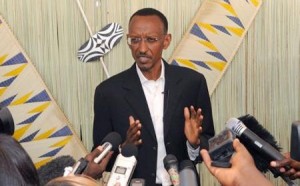 President Paul Kagame has rebuked the U.S. State Department’s decision to sanction his country over its alleged association with the M23 rebel group.

President Kagame said the decision fits into the plan of exiled Hutu rebels in the Democratic Republic of Congo and elsewhere who, according to him, seek to destroy what the Rwandan people are trying to build. He also questioned why his country was being held accountable for the faults of others.

On Thursday, the U.S. State Department announced that under the Child Soldiers Prevention Act of 2008, it is putting Rwanda, Sudan, Myanmar, Central African Republic and Syria on sanction for their use of or association with groups who use child soldiers.

The sanctions particularly concern military aid. The U.S. Government announced that Rwanda would not receive U.S. International Military Education and Training Funds as well as U.S. Foreign Military Financing in the 2014 fiscal year.

Linda Thomas-Greenfield, the U.S. assistant secretary of state for African Affairs said the U.S. government’s goal is to work with these countries it has sanctioned to ensure that “any involvement and recruitment of child soldiers” are stopped.

Spokesman for the Rwandan Armed Forces, Brigadier General Joseph Nzabamwita said the U.S. has enough information about his country’s activities to know it is not in any alliance with the rebel group.

He said “Rwanda’s commitment to a sustainable solution that seeks to bring an end to the DRC conflict and its consequences, including the use of child soldiers, remains unchanged.”

Many observers have questioned the sanctions, especially since three countries – South Sudan, Chad and Yemen – who are suspected of using child soldiers were exempted from the sanctions and two others – Somalia and the Democratic Republic of Congo – received partial waivers.

It is unclear how deep the supposed alliance between the Rwandan government and M23 rebel group goes. But the Tutsi-dominated government has twice invaded the DRC to unsettle Hutu rebels.

President Kagame of Rwanda came to power after the 1994 genocide – one of the most bloody events in the history of the nation which left close to 800,000 people dead. The country still struggles to overcome the effects of that violent outbreak.