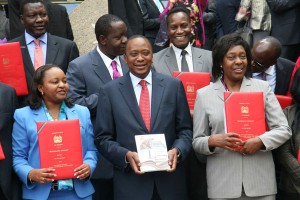 Kenyan president, Uhuru Kenyatta, has warned all incompetent state workers to leave before the government catches up with them.

Speaking during the signing of performance contracts for cabinet secretaries, Kenyatta said his government was not going to tolerate public officers who could not deal with the challenges of public service.

“Should you find yourself either unable or unwilling, you owe it to Kenya, and to your conscience, to stand aside in good faith. Our people do not expect to hear excuses instead of service delivery,” he said.

“It is irritating to observe that part of our national challenges is caused, not by unavoidable or elemental phenomena, but sheer incompetence and corruption by people who ought to know better,” he said.

“It is not desirable at this stage of our journey to progress, to be obstructed by characters who give no value for public money spent on them. The time has come to detect and cull them,” he explained.

Kenyatta also said that his administration would support and reward conscientious and hardworking individuals going forward. Those who meet the government’s goals will be rewarded and those who fail will be penalized.

The president also launched the Second Medium Term Plan for vision 2030 which will be implemented between 2013 and 2017.

In the 2014/2015 financial year, the government plans to engage the public in formulating the Medium Term Expenditure Framework and plan targets. Both consultations will take place at the same time to ensure a smooth cycle from planning, resource allocation and monitoring of results. This will facilitate a framework of rewards and sanctions for public officers.