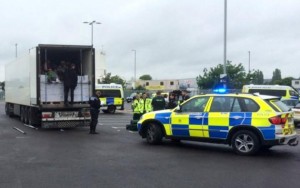 Officials in Britain have arrested 28 illegal African immigrants who were found hiding in the back of a refrigerated lorry.

Police reportedly discovered the truck at a lorry park located in Portsmouth, Hampshire this week.

Officials reportedly stopped the articulated truck on Walton Road, Drayton on Saturday before finding the immigrants.

During a search of the truck, 11 Eritreans, 10 Sudanese and seven Ethiopians nationals were found.

The Home Office only released the nationalities of the immigrants on Tuesday following calls from Portsmouth South MP Flick Drummond.

The driver of the vehicle, which is suspected to have been coming from France, is a 61-year-old from the Czech Republic.

An ambulance team provided the group of immigrants, which included men and women, with medical treatment before they were taken into custody.

One male migrant reportedly needed urgent medical attention and was transferred to the Queen Alexandrian Hospital. A minor, who was part of the group, has been taken to social services.

The Border Force detained the group on suspicion of being in the UK illegally. Reports indicate that their status as asylum seekers is now being assessed by British officials.

The bus driver was also arrested on suspicion of aiding asylum seekers to enter the UK. He has since made bail.

The case, which will be dealt by immigration officials, may resume in August.

Thousands of migrants from Africa and the Middle East continue to enter Europe via the Mediterranean Sea. Besides Syrians, East Africans make the largest immigrant population.

People from Eritrea, Sudan, and Somalia reportedly make up a large percent of the immigrants entering Europe.

Thousands of people have died trying to enter Europe illegally. The United Nations (UN) has revealed that in 2015, about 190,799 people arrived in Europe via the sea – while 1,375 died or went missing.

Europe is struggling to deal with the refugee crisis.