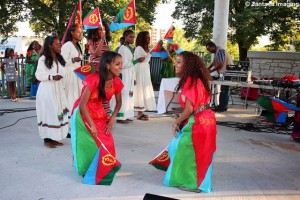 Eritreans across the globe are celebrating 25 years since their country attained independence. Thousands in the diaspora are expected to travel to Asmara for the national holiday which remains a special occasion for many despite Eritrea’s repressive reputation in the media.

Over the years, the patriotic celebrations have perplexed countries where thousands of Eritrean migrants seek asylum.

May 24th is arguably Eritrea’s important popular public holiday. On that day in 1991, the Eritrean People’s Liberation Front took over Asmara and declared independence after a 30-year-war against neighboring Ethiopia. The state of Eritrea was born in 1994.

Eritrea has been described as the “North Korea” of Africa. Asmara has, however, dismissed the tag as “unjustified.”

“This whole idea of a country that is closed, isolated or that willfully represents or pursues an isolationist policy is wrong,” Eritrea’s Information Minister Yemane Ghebremeskel told France24.

Eritrea continues to make headlines due to the alarming number of its citizens leaving the country yearly.

The United Nations estimates that about 5,000 Eritreans flee the country monthly. Eritreans make up a large part of the immigrants seeking asylum in Europe. About 39,000 of the 154,000 migrants that entered Europe in 2015 via the Central Mediterranean Route are Eritreans.

A large percentage of these Eritrean migrants reportedly fled their homes due to human rights abuses. Others travel for economic reasons. Eritrea is considered one of the most underdeveloped countries in the world.

A mandatory military service, which begins at 18, is reportedly the main reasons why many Eritreans risk their lives to enter Europe. Although the service is supposed to last for 18 months, it allegedly  goes on for decades.

Eritrea has acknowledged the threat that this mass migration poses to its economy. However, Asmara insists that conscription is a national security necessity.

Eritrea has been under a state of emergency since 2001 – a year after the end of a bloody border war with Ethiopia, which started in 1998.

Asmara has dismissed several calls pushing for an end to its controversial conscription policy.

“You are talking about the prolongation of national service in response to…continued belligerence by Ethiopia,” Ghebremeskel told Reuters. “Demobilization is predicated on the removal of the main threat.”

“The government is doing the utmost it can do, under the circumstances,” he said. Ghebremeskel added that the solution to deter young people from migrating to Europe would not include canceling the conscription program.

The government has reportedly sought to reduce the duration of its national service while promising to increase the salaries conscripts are paid.

Eritrea’s economy continues to be affected by sanctions imposed by the UN Security Council over the country’s alleged role in the conflicts around the Horn of Africa. The government has nevertheless focused its attention on investing in food security, agricultural production, and infrastructural development.