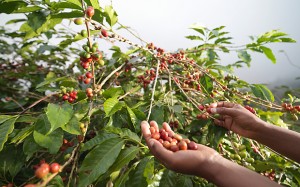 A new study has revealed that climate change and aggressive farming may make growing coffee impossible by the end of the century.

The study, complied by eighty scientists, warned that countries like Ethiopia and Brazil may lose large chunks of their coffee farms to adverse weather conditions.

Brazil, which is currently experiencing drought, is the world’s largest coffee producer. Ethiopia, Africa largest producer, is second in the world.

According to the study, which was produced by Kew, about two-thirds of the land used to grow coffee beans in Africa is likely to be “unviable” by 2100.

Dr. Monique Simmonds, a deputy director at Kew, says coffee has become vulnerable to drought and climate change because of a “narrow range of diversity” within the types of domesticated coffee beans.

“Coffee is one of the most important commodities after oil if you look at world markets,” Dr. Simmonds said.  “If we hadn’t had the effect of environmental factors, including climate change and drought, then we would likely still be able to grow the varieties of coffee we’re currently growing at the moment.”

However, scientists say a coffee-less future can be averted by creating new coffee plantations at higher locations, where the beans can get adequate amounts of rainfall.

“If appropriate interventions are made, particularly the establishment of new coffee areas at higher elevations, there could be substantial overall gains for coffee farming in Ethiopia that would provide resilience for their coffee sector at least until the end of this century,” the scientists stated.

Coffee is not the only crop that will be affected by future drastic weather conditions. The production of food staples like bananas, sweet corn, and kidney beans will also be greatly affected by the end of the century.

The study estimates that a third of the land used to grow these staples in sub-Saharan Africa will be useless for farming by 2100.

“Up to 30% of areas growing maize and bananas, and up to 60% of those producing beans, are projected to become unviable by the end of the century,” the study said.

Scientists suggest that crops like cassava, yams and drought-resistant cereals like millets and sorghum are used replace the vulnerable staples.