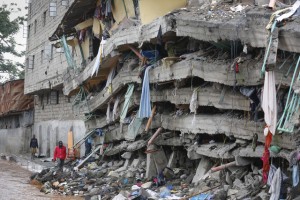 Kenyan rescuers have found a one-year-old girl hidden in a bucket in the rubble of a residential building that collapsed in Nairobi on Friday.

Rescue workers found the child, who was wrapped in a blanket, in the bucket around 4.a.m on Tuesday. Despite being severely dehydrated, the child showed no visible signs of injury.

The collapse of the building killed over 21 people and left many others injured.

Kenyan Red Cross announced that the child has been transferred to the Kenyatta National Hospital for medical care.

The rescue of the child has been celebrated amid the carnage. On Monday, rescuers said the chance of finding more survivors in the rubble of the collapsed low-income building was unlikely.

Dozens of people are still missing from the six-storey building, which collapsed on Friday after heavy rains. Rescuers have freed about 135 people since the deadly incident occurred.

The owner of the building with 119 rooms, which had been marked for demolition, was arrested on Monday. Mr. Samuel Karanja Kamau is scheduled to appear in court on Tuesday.

Kamau is expected to face man slaughter charges. He allegedly did not have permission to rent out the building located by a river.

Despite being marked for demolition by Kenya’s National Construction Authority, the building was not destroyed.

Nairobi’s governor Evan Kidero blames the building’s collapse and the resulting deaths on the country’s corrupt practices. He said building laws are undermined due to bribery.

“People who’ve died in Huruma have died an unnecessary death. That death is a product of corruption….someone is paid $10,000 or $20,000 to approve the building that cost the lives of Kenyans,” legislator Johnson Sakaja said.

About 300 people living in the buildings next to the collapsed structure have been evacuated.

A report ordered by President Uhuru Kenyatta last year found that 58 percent of the buildings in Nairobi are unfit for human habitation. According to the report by the National Construction Authority, over 4 million people live in slums and low-income areas in Nairobi.