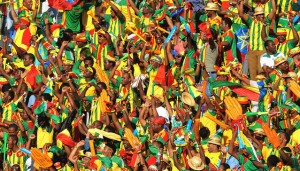 Ethiopia and Algeria drew 3-3 on Tuesday in a dramatic 2017 African Cup of Nations (AFCON) qualifying match.

Host Ethiopia started the game with fervor; their attacks on the Algerian defense in the first four minutes of the game earned them three corner kicks.

The Walias of Ethiopia netted a goal 28th minutes into the first half.

Islam Slimani and Aissa Mandi equalized for Algeria before Ethiopia regained the lead with a goal from Dawit Fekadu.  The celebrations ended abruptly with five minutes remaining after Algeria equalized again – this time from a penalty kick by Faouzi Ghoulam.

A victory for the Desert Foxes of Algeria would have made them the first team to qualify for the 2017 AFCON games in Gabon.

Meanwhile, Lesotho earned their first point in the other group match with a surprise win over Seychelles. Lesotho won the game by a lone goal from Tumelo Khulang.

The victory avenges Lesotho’s 2-0 loss to Seychelles in the first leg of the tie.

Algeria tops Group J with 10 points after winning all three matches including a 7-1 victory over Ethiopia on Friday. Ethiopia has 5 points, Seychelles has 4 and Lesotho has 3.