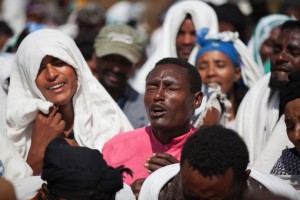 An Ethiopian rights group on Monday accused the government of mass human rights abuses during the recently ended protests in the Oromia region.

A report by the Human Rights Council (HRC) alleges that Ethiopian security forces carried out over 100 extra-judicial killings during the protests.

According to the Addis Ababa-based group, about “102 extra-judicial killings” were conducted from November to February – the duration of the protests.

The report claims that the victims, whose ages range from 16 to 68, were mostly killed at night. Most of the people killed “were shot in the back of the head.”

The group said it has discovered evidence of beatings, illegal detention, torture and forced disappearances. About 56 people were reportedly shot or beaten, while 22 were torture.

“Many of the killings occurred at night, after protests, while people were walking in the streets,” said Kumlachew Dagne, HRC’s vice chairman.

A plan to extend Ethiopia’s capital city into Oromia, the largest region in Ethiopia, was widely protested against. The series of protests involving students and farmers has since stopped. However, according to the BBC, the protests are still ongoing.

Human Rights Watch reports that at least 140 people have since been killed in the unrest. However, Ethiopian officials dismissed the report as unauthentic.

Prime Minister Hailemariam Desalegn has apologized for the “death and destruction” that occurred during the protests.  Last week, he said his government “unreservedly apologizes to our people for what happened.”

Although Hailemariam said the protests were orchestrated by “anti-peace forces,” he noted that it had raised “legitimate questions” worth answering.