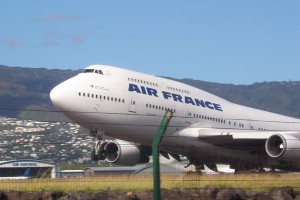 An Air France flight from Mauritius was forced to make an emergency landing in Mombasa, Kenya on Sunday after a device suspected to be a bomb was found in the toilet.

The Boeing 777 aircraft was heading to Charles de Gaulle airport in Paris morning when the device was found aboard.

Kenya Police spokesman Charles Owino said the plane carrying 459 passengers and 14 crew members requested an emergency landing at the Moi International Airport around 12.37 am. The plane left Mauritius around 9 pm.

The passengers and crew were safely evacuated from the plane. Kenyan bomb squad experts successfully removed the suspected device from the aircraft afterwards.

“Bomb experts from the Navy and DCI (Directorate of Criminal Investigations) have retrieved the device and are determining whether the components contained explosives,” Police Inspector General Joseph Boinnet said.

Reports indicate that Kenya is working with both Mauritian and French officials to determine the contents of the suspicious device.

Operations at the Moi International Airport were momentarily disrupted after officials closed down the airport to search the Air France flight.

Owino announced on Twitter that operations have since resumed to normal since the incident.

Reports indicate that several passengers of the Air France flight 463 are being questioned about the suspicious device. It’s unclear if any passenger has been arrested in connection with the device described as a ‘gadget.’

The Air France crew did not inform the passengers that a suspected bomb had been discovered in the toilet. Instead the passengers were told that the plane was experiencing technical difficulties.

In a statement, Air France said the passengers were evacuated from the flight using the emergency slides as a precaution. The airliner has reportedly sent another plane to pick up the passengers. The flight is scheduled to leave Mombasa for Paris on Sunday afternoon.