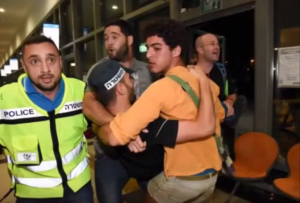 A 29-year-old Eritrean man seeking asylum in Israel has died after being fatally misidentified as a terrorist on Sunday. The innocent by-stander was shot by a security officer and beaten by an angry mob following a bloody attack at an Israeli bus station.

Israeli officials announced that Haftom Zarhum, the Eritrean victim, died of his injuries on Monday.

The attack at a central bus station in Bir-al-Saba is one of the bloodiest in a series of violent attacks in the country recently. The Arabic assailant of Sunday evening’s attack killed a 19-year-old Israeli soldier and injured 11 others.

21-year-old Mohannadd Al-Aqaby, an Arab-Israeli citizen from the city, has been identified as the assailant. Although his motives are unclear, a majority of those injured are Israeli security officials.

Al-Aqaby was armed with a knife and a gun when he went on a rampage at the bus station. After gunning down Sergeant Omri Levy of the Golani Brigade, he reportedly took the officer’s weapon.

Al-Aqaby was later gunned down by Israeli police officers, who responded to the scene.

Amid the bloody attack, a bus station security officer somehow mistook Zarhum to be Al-Aqaby accomplice. The Eritrean, who was visiting the city to secure a visa, was shot and wounded in his lower body. As Zarhum bled profusely on the floor, an angry Israeli mob beat him mercilessly.

A long bench was thrown on him; others tried pinning him under a chair as he lay in a pool of blood. A sickening amateur video captures defenseless Zarhum squirming in pain while being beaten.

According to Ynet, the angry mob prevented medics from treating Zarhum and transporting him to a hospital. The crowd, who gathered outside the bus station, reportedly chanted “death to Arabs” and “Arabs out”.

Israeli officials have not said if charges will filed against the bus security officer who misidentified and shot Zarhum. It is also unclear if any member of the angry mob will face charges over Zarhum’s beating and death.

The police have admitted that Zarhum may have been mistaken for a terrorist because of the color of his skin.

Israel has been criticized for its treatment of African refugees, who face frequent hostility and racism. There are currently about 45,000 illegal immigrants living in Israel – about two thirds of them are Eritrean citizens fleeing the oppressive regime in their home country. Other African migrants in Israel include Sudanese and Ethiopians Jews.

Israelis have been on the edge recently after a series of bloody clashes with Palestinians over the al-Aqsa mosque – a site holy to both Jews and Muslims. The government has even eased the requirements for purchasing guns as violence escalates.

“The terrorists don’t stop. This is a stepping up from knife attacks to shooting,” Eli Ben- Dahan, Deputy Defense Minister, said following Sunday’s attack. “I call again on the government to expel the families of terrorists. This is the only step that will deter them from carrying out the next terrorist attack.”

In two weeks, fighting in Israel has resulted in about 52 deaths – 8 Israelis and 44 Palestinians. Most of the Israeli victims died through knife attacks on buses or on the street, while the Palestinian causalities include assailants and protesters shot by Israeli security personnel.

In an attempt to abate the violence, U.S. secretary of state John Kerry has announced a meeting with the leaders of Israel and Palestine.

The Eritrean government, which has been heavily criticized by the United Nations for mass human rights violations, has not commented on Zarhum’s death.