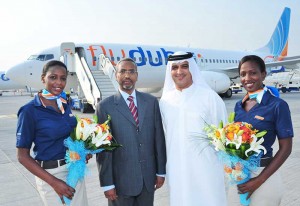 Gulfbusiness-Dubai-based airline flydubai has announced that it will begin services to three new destinations in East Africa from September.

The budget airline, which currently flies to nine destinations in Africa, said that it will begin services to Bujumbura in Burundi, Entebbe in Uganda and Kigali in Rwanda.

The latest route additions will bring the total number of destinations in the carrier’s network to 80, the statement said.

“We are delighted to announce the launch of three new East African destinations which also sees flydubai become the first national carrier from the UAE to fly to Rwanda and Burundi, underlining our commitment to opening up underserved markets,” said Ghaith Al Ghaith, CEO of flydubai.

In addition to operating flights between Dubai and these East African routes, flydubai has also obtained approval to transport passengers between Uganda and Burundi.

“We have announced 17 new destinations since the start of 2014, matching the total number of destinations flydubai launched last year. We look forward to continuing to expand our network as we remain committed to supporting Dubai’s trade and tourism sectors,” said Al Ghaith.

The Dubai-based budget carrier has a fleet of 39 aircraft and aims to take delivery of 100 new aircraft by the end of 2023, all of which will be Boeing 737-800s. Since it began operations in 2007, it has started services to 54 new routes that did not previously have any direct air links to Dubai.