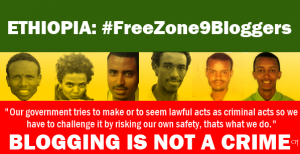 A court has directed the police to finalize its investigations and file charges against 6 members of a blogging community ‘Zone 9’, as well 3 journalists, who have been in custody for about 58 days

Defense attorney, Amha Mekonnen, told journalists after the hearing at the Arada First Instance Court last week, that the charges will be filed during the group’s next hearing on July 13th.

The police, who have requested that the commentators are held under a ‘no-bail’ condition, have repeatedly requested more time from the court to gather evidence to support their allegations against the group.

Shortly after their incarceration, officials explained that the group were taken into custody after being accused of conniving with foreign organizations illegally posing as human rights activists and collecting bribes to incite division and destabilise the country via social media.

But, ‘Zone 9’ describe themselves as “an informal group of young Ethiopian bloggers working together to create an alternative independent narration of the socio-political conditions in Ethiopia.”

The Ethiopian government has been accused of suffocating free speech and criticisms of its decisions. The country has one of the worst ratings worldwide for press freedom. Reports indicate that several commentators are currently languishing in deplorable detention centers across the country for simply expressing a dissenting opinion. The government has also been accused of tracking internet usage and many websites are reportedly blocked from ordinary visitors in the country.

Local sources say the social media accounts of the incarcerated ‘Zone 9’ bloggers have since been short down. There are unconfirmed reports that members of the group attempted to reach some of their colleague through Google mail while in prison. Reports indicate that the group had ceased their activism for some months prior to their arrest; allegedly due to harassments, threats and concerns of being under the surveillance of the government.

While the latest development in this case has invariably inspired more calls for the release of the group, it has also brought relief to some observers.

Pundits say there had been concerns that the authorities would keep the group in detention for a prolonged period without bringing any charges against them.

Ethiopia’s Anti-Terrorism Act 2009, which allegedly permits the authorities to keep people in detention without charges for a long time, has also been criticized for being ambiguous.