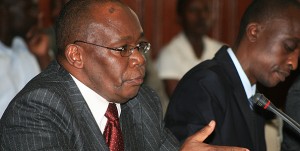 The Law Society of Kenya have petitioned the country’s legislators to depose Attorney General Githu Muigai.

The lawyers are charging the AG with incompetency after the state has failed to win two landmark corruption cases.

Many other social advocacy groups have also raised alarm following the president’s order that the Treasury releases Sh1.4 billion to the two financiers involved in the cases.

In 2012, a Geneva Court ordered the Government of Kenya to pay about $10 million to First Mercantile Securities Corporation (FMSC). Also, in 2013, a Court in London directed Kenya to pay over $7 million to Universal Satspace.

Reports indicate that the unpreparedness and negligence of state lawyers contributed a great deal to the outcome of the proceedings.

Officials have disclosed that there is no legal recourse to the order to pay the financiers.

An official statement on the issue has explained that the President is not legitimizing these fraudulent transactions with his directive to pay these companies.

Instead, it explains that “The Government’s decision to settle the judgement debts is premised on (i) protecting Kenya’s economy on account of rising interest rates occasioned by domestic borrowing due to constrained access to international borrowing, (ii) protecting Kenya’s reputation as a country that meets its contractual obligations and adheres to the rule of law,(iii) protecting Kenya’s assets abroad, and (iv) maintaining and improving Kenya’s credit rating currently at B+.”

Reports indicate that the president has ordered an investigation into all similar ‘Anglo-leasing’ loan agreements.

The 2003 loan deal with these companies for security communication equipments reportedly violated Kenya’s procurement regulations. Investigators have revealed that the projects were also overpriced. Additionally, the financiers allegedly failed to provide some of the loans, but have been billing the government for interest.