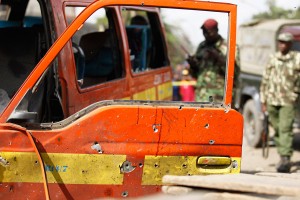 Two almost simultaneous blasts at the Gikomba market, Nairobi, has claimed the lives of 10 people and left up to 79 injured.

Reports indicate that the first explosion came from a mutatu minibus and the other from a clothes store in the market.

The Police Chief of Nairobi, Benson Kibue, told the press that it is likely the attackers threw the improvised explosive devices at their targets.

He also revealed that 2 suspects have been arrested in connection with the attack.

No group have owned up to the recent attack. However, al Shabab is held as the most likely suspect.

The group have orchestrated a spate of deadly attacks in Kenya this year in a bid to pressurize the government to withdraw from Somalia.

President Uhuru Kenyatta has sympathised with victims of the attack and their relatives. He has also vowed to fight terrorism, which he described as “evil.”

Meanwhile, critics have noted that this attack is consistent with the recent travel warnings issued by some western governments.