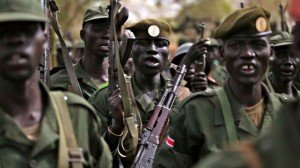 Opposition forces in South Sudan have reclaimed a key oil-rich city on Monday, less than 24-hours after the military announced they had wrestled control from the rebels.

He also revealed that “pro-Salva Kiir soldiers and their allies suffered heavy casualties and are being pursued northwards.”

This revelation is consistent with a report by the BBC that government’s forces were rather surprisingly withdrawing from the city earlier today.

Army spokesman, Philip Aguer, also confirmed to the press today that fighting was ongoing in and around Bentiu for control of the city.

However, the chief rebel commander in Unity State, Gen. Koang Choul Ranley, has revealed to Upper Nile Times that the rebels have also successfully forced the government’s forces to retreat from the outskirts of the city.

He further disclosed that about 112 government forces were captured during the exchanges. “We are not going to kill them just as we dont want to kill any prisoners,” he said.

Bentiu has been one of the central points of the struggle between the two factions since armed exchanges commenced in December last year.

The rebels have been accused of committing a massacre of ethnic Dinka civilians during their campaign to take back the city last month. However, the group’s spokesman, Lul Ruai Koang, has denied these charges.

United Nations experts recently warned the security council that the ongoing fighting in the world’s youngest country has the potential to spiral out of control into a genocide.

Despite the recent turn of the situation, reports indicate that President Salva Kiir is still ‘willing’ to meet with Riek Machar in accordance to his agreement with the U.S. Secretary of State, John Kerry, last week.

Foreign Ministry spokesman, Mawien Makol, who disclosed this news to the media, added that “People are working on that to try to make it as soon as possible.”

No date has been formally set for this highly anticipated meeting between the two rivals.

Meanwhile, reports indicate that Riek Machar has been forced from his hideout in Upper Nile State after it came under the attack of government forces over the weekend.

The army is reportedly currently in control of Nasser and rebel forces have been dispersed from the city. Army officials have indicated that Mr. Machar is believed to in hiding near the Kenya-Ethiopia border.

While government sources claim there is calm in Nasser, reports indicate that the rebels are mounting a counter-attack in Renk County.

It is unclear how this new state of affairs will affect the impending meeting between the leaders of the two opposing factions. However, Mr. Machar recently revealed that he did not have high hopes for the meeting.

The rebels have accused the government of sourcing mercenaries from the Sudanese rebel Justice and Equality Movement. But outgoing South Sudanese General, James Hoth Mai, has also charged the Sudanese government with arming and supporting the rebels.

Heads of States of Intergovernmental Authority for Development (IGAD) member-countries failed to gather for a meeting in Juba last week Friday. However, South Sudanese authorities have disclosed that the meeting will be rescheduled. The regional authority is expected to deploy crucial peace keeping forces to the country in the coming weeks.

Meanwhile, the third round of peace talks between the warring factions – being mediated by IGAD – resumed in Addis Ababa a week ago. But the two sides are reportedly yet to properly commence the discussions due to many divergences.