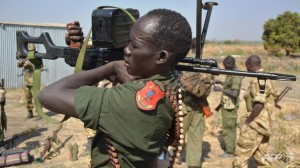 Forces from the South Sudanese military and Sudan People’s Liberation Army (SPLA) have recommenced offensive campaigns in the war-torn nation on Sunday.

Meanwhile, reports indicate that another offensive is ongoing in Bentiu, Unity State.

From all indications the ongoing combat was instigated by government forces. Some pundits have speculated that the move is aimed at protecting vital wells and oil pipeline routes in the two states. But officials are yet to divulge any information.

Meanwhile, the National Courier has announced online that Army spokesman, Philip Aguer, has disclosed that his men have successfully been able to recapture Bentiu and Nasser from the rebels.

It is unclear how this development will affect the impending meeting between President Salva Kiir and rebel leader, Riek Machar.

Already, reports indicate that Mr. Machar is dragging his feet over the prospect of meeting President Kiir in Addis Ababa.

The United Nations (UN), East African Community (EAC) and several nations have threatened to impose sanctions on South Sudan if the four-month-long fighting in the country does not cease. However, members of the United Nations Security Council were divided when the issue was brought up at a meeting of the council last Friday.