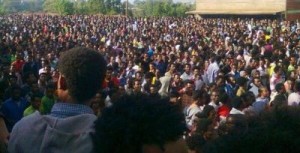 Thousands of ethnic Oromo students and other groups have taken to the street this past week to express their displeasure over the government’s plans to extend the boundaries of the nation’s capital.

Reports indicate that under the ‘Integrated Development Master Plan’ the state’s limits is set to be extended by more than one million hectares. Commentators have projected that this will swallow up about 36 Oromia cities into the jurisdiction of Addis Ababa.

Protests have been reported in all the eight major universities in Oromia since Tuesday. Official sources say up to 7 people have been killed and about 70 injured since the protests began. However, the other reports claim the death toll is more than 20.

Addis Ababa (called ‘finfinne’ by the Oromo) was reportedly at the heart of Oromo culture until it was conquered in the 19th century. Although Addis Ababa has managed to flourish into a large, powerful state, it still remains largely dependent on the neighboring Oromia – the largest state in Ethiopia.

The protesters accuse the government of marginalizing the Oromo people. They have also charged the authorities of systematically stifling the growth of Oromo nationalism and perpetuating the loss of the ethnic group’s culture.

Addis Ababa is reportedly one of the fastest growing states in Africa – supported by a buoyant economy and a high rate of rural-urban migration. With a population of over 4 million, Addis Ababa is already regarded as one of the largest cities in sub-saharan Africa.

While Addis Ababa is manifesting all the unwanted features of a crowded state (i.e. bad traffic, large slum settlement and an increase in crime rates). The state has also experienced an increase in the rate of new constructions and employment opportunities.

Meanwhile, many commentators continue to underscore the delicacy of the situation – noting that Ethiopia’s deep ethnic division will negatively affect efforts to resolve the dispute.

The Ethiopian government has, however, dismissed the protests as unrest generated by “confused” students who went on to spread rumours and mislead others.

Reports indicate that Oromo people in Ethiopia and around the world are planning to stage global protests this month against the contentious plan of their government.