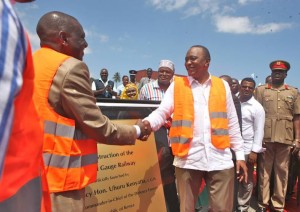 South Sudan will join Rwanda, Kenya, and Uganda in a standard gauge railway (SGR) project that seeks to enhance regional integration and trade.

A Joint Technical Committee (JTC) in charge of the project has issued a statement indicating that the African nation is in the process of endorsing the agreement.

Last year, Kenya struck a deal with Rwanda and Uganda to build a railway that would connect the Mombasa port to Kigali, reports reveal.

Reports indicate that the decision to include South Sudan in the project comes after the committee proposed an amendment to the agreement during a three-day meeting in Nairobi last month.

If the leaders approve the draft protocol by the committee, the four states will jointly mobilize funds and manage the project, experts say.

Analysts say the railway project is an opportunity to overhaul the East African railway network, which is currently in a poor shape due to years of neglect. They further add that the network would help decrease transport costs within East African nations.

While governments in the EAC have set aside funds over the years to restore the railway system, analysts say politics, bureaucracy, and indecisiveness have frustrated any projects.

Furthermore, infrastructure constraints, poor road and rail networks, and congested ports increase the cost of goods, resulting in slow growth within the region.

The completion of the first phase has already taken place following the construction of the Syokimau Station in Kenya, reports indicate.

In a press statement published last week, Leonard Bol of South Sudan’s Transport Ministry expressed his country’s excitement over the prospects of joining the project. He also disclosed that the South Sudanese government wants to be part of all major infrastructural projects in the region.

Last year, President Salva Kiir gave his assurance that his government would participate in the project, which is expected to stimulate production and decrease the cost of services.

The East African Community hopes to become a competitive investment destination and observers say the project will progress the region in that direction. Nevertheless, the historic project has reportedly attracted some criticisms – particularly over its cost.