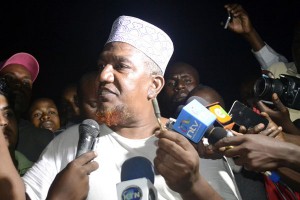 A renowned radical Muslim cleric, Sheikh Abubakar Sharif, also known as ‘Makaburi’, was shot dead on Tuesday evening outside a court building some miles from Mombasa.

Reports indicate that the cleric was waiting for a vehicle outside Shanzu court building at about 6:00pm when a group of unidentified men in white robes crawled out of a moving car and opened fire on him and his colleagues before speeding off, according to Standard Digital.

Online sources say one of the four men with the cleric has been pronounced dead, while the others sustained gun shot wounds.

According to Horseed Media, Makaburi had visited the Shanzu Law Court in the Shimo le Tewa Maximum Prison, Mombasa, to request for lenient amendments to his bail condition. However, the hearing was reportedly postponed due to a court function.

Less than a week before his assassination, the sheikh had voiced his support for al Shabab’s cause and vindicated the attack on the Westgate Mall in Nairobi last year.

Following the recent terrorist attacks in the country, the Majority Leader in the National Assembly, Aden Duale, is reported by The Kenyan Daily Post to have implored the government to use force if necessary to put the cleric under control.

Several other top officials, including the vice president, William Ruto, has recently also entreated the security agencies not to hesitate in the use of force to protect civilians and state property.

Reports indicate that the sheikh, who is on the watch-list of the United States Government and the United Nations, was recently linked to the attack on the Joy Repentance and Holiness Church in Likoni, Mombasa.

According to a report by Standard Digital, Makaburi aided the attackers of the church in procuring weapons for the deadly siege.

The sheikh had reportedly also recently won damages amounting to about Sh670,000 less than a week before his death over an illegal raid on his home a few years ago.

Many commentators have pointed to the fact that the sheikh’s assassination is likely to increase the religious tension in Kenya – which has reportedly reached disturbing levels over the past month.

The unexplained assassination of several outspoken Muslim leaders over the past three years has created a rift between sections of the country’s Muslim community and the country’s security agencies, who have been accused of complicity in these murders.

Reports indicate that angry Muslim youths struggled with the police for possession of the body of the sheikh, forcing the officers to fire warning shots into the air to disperse the crowd yesterday, according to Reuters.

Police officers patrolled the streets of Mombasa on high alert today, according to Global Post.

Many commentators have warned of reprisal attacks by terrorists associated with al Hijra and al Shabab – both of whom the late Sheikh was closely linked to.

Meanwhile, two Muslim groups – Muslim for Human Rights (Muhuri) and Haki Africa – has threatened to take to the streets if the authorities do not disclose the murderer of the famous cleric by Saturday, April 5th, according to Reuters.

Photo by Laban Wolloga: The late Makaburi speaks to reporters at the scene of the assassination of Sheikh Ibrahim Ismail in October 2013.