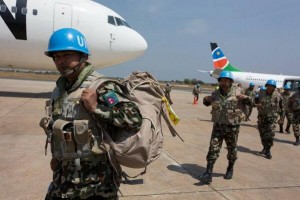 The government of South Sudan has reportedly submitted a request to the Inter-governmental Authority for Development (IGAD) for troops to be deployed to protect vital facilities in the destabilized country as fighting continues between the army and a loose coalition of rebels.

According to a report by Sudan Tribune, the proposal by the South Sudanese government is currently under consideration by IGAD – the same body mediating peace talks between the warring factions in Addis Ababa.

Last week, Tanzania and Kenya both committed to provide troops to the African Union Mission in South Sudan, which is set to takeover command from the Ugandan People’s Democratic Force (UPDF).

Currently, besides the UPDF, the governments of several nations including Kenya and Ghana have deployed troops to support the peace-keeping mission in South Sudan.

Meanwhile, South Sudanese officials have revealed that the UPDF will be re-deployed to the Western Equitoria region following widespread debate about their direct involvement in clashes with rebels.

Reports indicate that fighting continues to rage in parts of South Sudan.

Doctors Without Borders has reported clashes in Malakal and Leer, Upper Nile State, in the past week. The organization says its operations has been severely affected by the fighting as several medical facilities and supplies were destroyed.

Both the army and the rebels in South Sudan have been accused of human rights violations by governments and activists. African Union and the United Nations have both reportedly dispatched teams to investigate these claims.

According to UN estimates, up to 800,000 people have been displaced from their homes and over 10,000 killed since violence erupted in the world’s youngest nation on December 15th, 2013.

The United Nations Mission in South Sudan  (UNMISS) says up to 75,000 civilians are hiding in its bases across South Sudan.

Reports indicate hundreds of civilians continue to vacate their homes. While many head for the border or shelters within the country’s borders, others have thronged into the bush and nearby islands.

Aid agencies have relayed horrific reports of the terrible conditions these civilians are living in. Several aid agencies have also revealed that their supplies are dwindling rapidly due to the large number of refugees.

Reports indicate that there are fears of an impending shortage of water, food and other important supplies in shelters across the nation.

Hope for peace talks
The Press Secretary for the Office of the President of South Sudan, Ateny Wek Ateny, on Sunday told the media that the government will convene a constitutional conference as the rebels have requested.

According to him, this will only be done on the pre-condition that the rebels agree to a permanent ceasefire and allow humanitarian assistance be delivered to civilians.

This revelation has been hailed by many observers, after the peace talks in Addis Ababa have progressed at a very slow pace.

Mr. Ateny, however, insists that the 4 ex-state employees arrested in connection with the insurrection will stand trial. He also revealed that 50 suspects have been arrested for complicity in ethnic clashes between the Nuer and Dinka people.

South Sudanese authorities have accused its foreign partners of having a hand in the failed attempt to overthrow the legally elected government.

According to Mr. Ateny, the UN and several aid agencies have supported the rebels in their insurrection.

Despite the war, the South Sudanese government has managed to continue operating administratively.

Last week, President Salva Kiir signed a visa agreement with President Uhuru Kenyatta of Kenya, which will enable citizens from either country enter the other easily.

Reports indicate that oil production – the government’s primary source of income – has been affected by the war – this is reportedly one of the main reasons the government has called for troops from IGAD.

According to Mr. Ateny, the country’s rate of oil production has reduced by about 30%.

But officials are optimistic the government can weather this crisis and possibly emerge victorious in the country’s highly anticipated national elections in 2015.

The government has, meanwhile, said that it will not accept the rebel’s request for a power-sharing agreement or the removal of President Kiir prior to the next national elections.