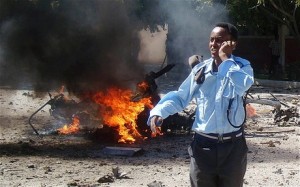 A car laden with explosives reportedly drove into a tea shop near Somalia’s National Intelligence and Security Agency headquarters in Mogadishu on Thursday, killing 12 people, including some security officers.

Several other officers and civilians are reported to have sustained injuries from the attack, which seemed to have specifically targeted national security employees who are known to frequent the outlet.

“We have carried some dead bodies and (people with) injuries, but when we went inside the restaurant, there were so many bodies it’s hard for me to say who is a soldier or a civilian at the moment, since we kept taking bodies away,” Police Commissioner, Ali Hamari, told reporters.

According to a spokesman for the group, Sheikh Abdiasis Abu Musab, the attack “targeted the national security forces who were sitting in the tea shop.”

He further noted that the attack is part of the group’s operation in Mogadishu, which has seen them attack several high profile locations – including Villa Somalia.

The terrorists have vowed not to abate the attacks against the Somali government and countries donating troops to the African Union mission in the war torn nation.

Reports indicate that the security agencies are currently conducting an offensive against al Shabab in southern Somalia.

Security experts have voiced concerns over safety in Mogadishu, which was reclaimed from the terrorists in 2011, after about 20 years without administrative control.

Many say the attacks on some of the most important locations in Somalia bares the terrorists’ intent to deal a heavy punch at the authorities.

Photo by Naharnet: A security officer stands in front of the rubble of a car explosion in Mogadishu.