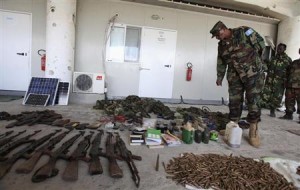 A confidential report by United Nations monitors in Somalia has disclosed that ‘systemic abuses’ of the United Nations Security Council’s arms embargo on the warring country has permitted weapon shipments destined for the government to be diverted to clans and rebels.

The report further reveals that government officials have made unreported shipments of weapons to private locations in Mogadishu.

In a resolution adopted in July 2013, the UN Security Council eased its arms embargo on Somalia and Eritrea to reportedly enable the provision of arms as well as military support and training to develop these nations’ security organs.

This resolution follows a ‘complete and general’ arms embargo on Somalia for over 20 years after the legal government was toppled in 1992. However, with regional, continental and international support, the Somali government has been able to improve its security and stamp out anarchy in large sections of the country.

Under the amended terms of the 2013 arms embargo on Somalia and Eritrea, the UN Security Council permits these governments to buy arms to support their war against insurgency. However, certain types of weapons are blacklisted and all weapon shipments are to be inspected by UN monitoring teams designated to these nations.

But the monitoring group says there have been several unaccounted weapon shipments to Somalia, including some destined for African Union peace keeping forces. The group has also revealed that Somali officials have connived to prevent the inspection of some weapon shipments.

The report alleges that violations of the weapon management and distribution agreement in Somalia has led to the arming of several clans, including the clan of the President.

The report also indicates that a weapon shipment destined for the government was diverted to al Shabab commander Sheikh Yusuf Isse.

In light of these developments, the UN monitors have recommended that the Security Council amends the arms embargo on Somalia once again to impose restrictions to prevent the reported violations.

The monitoring group has also requested that the UN places stricter reporting requirements on weapon shipments into the country at the Security Council’s upcoming meeting in March.

Meanwhile, several pundits and stakeholders have noted that these developments threaten the relatively current state of stability in several parts of the country.

Somali government faces criticisms
In the past few months, the government of Somalia has been subjected to criticisms by its continental and international supporters following reports of corruption.

In October 2013, the Central Bank governor of Somalia, Yussur Abrar, resigned after revealing that she had been forced to “sanction deals and transactions that would contradict my personal values and violate my fiduciary responsibility to the Somali people”.

She further disclosed that she had been undermined and threatened to comply with the requests of the government.

Although the government of Somalia has denied these accusations, several donors and supporters of the government have reportedly raised questions over the revelations.

Sources say Abrar’s dispute with the government began after she expressed pessimistic concerns over the government’s contract with Shulman Rogers – a legal firm in the United States the Somali government has reportedly contracted to assist in the recovery of the country’s frozen foreign assets.

On Friday, the Turkish government, who has been the single largest cash donor to Somalia, revealed that it has cut all direct aid to Mogadishu as of the end of 2013.

Pundits have noted that this revelation will come as a ‘big blow’ to the Somalia government, which continues to struggle to generate funds to support its administrational projects.

Meanwhile, Western and Middle Eastern pundits say it is unlikely their governments will increase direct aid to the Somali government to compensate for this loss.