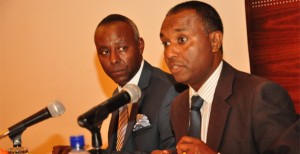 The first draft of the World Bank sponsored corruption study comes out pointing fingers at petty corruption in various government institutions, while playing down the impact of grand corruption.

The power, tax, investment and transport sectors have been identified as having the highest level of corruption, according to a draft finding by a study under the Federal Ethics & Anti-Corruption Commission (FEACC).

Employees of the Ethiopian Electric Power Corporation (EEPCo) have been identified by the study as being front-runners in asking for unofficial payments, with an average of 10 bribe requests for a single respondent in the study. The EEPCo is also the organisation with the highest average number of foreign companies seeking its services.

Traffic police, on the other hand, have asked more of the respondents for bribes than any of the entities surveyed, according to the report.

The draft report, which included the responses of 350 foreign investors, took two and half months to produce. The final report is expected to be released a month after the World Bank approves its finalisation, according to the guidelines.

“Around 16.6pc of the respondents reported a total count of 370 requests with an average of six bribe demands per respondent,” said the draft study released on Thursday, January 25, 2014, at the Hilton Hotel, under the title “Perception of the Level of Corruption by Foreign Investors in Ethiopia”.

Six percent of the respondents also reported that employees of the Ethiopian Revenues & Customs Authority (ERCA) had asked them for money- a total count of 54 times for customs licenses and 49 times for tax inspection.

The findings of the draft study, nevertheless, indicated that grand corruption is not a threat to Ethiopia, as none of the respondents reported confronting it.

“Petty corruptions exist in almost every office,” said Ameha Diana, director general of Selam Development Consultants Plc, which conducted the survey.     “With only some institutions standing out in level of corruption, Ethiopia is freer than several other countries as far as corruption is concerned.”

Judges and court officials, employees of standards and safety offices, those in the water and sewerage agency and the state telecommunications company, Ethio telecom, have also been identified as asking for bribes.

Employees involved with customs and trade licenses, land acquisition, licensing authorities and tax agencies, as well as government procurement have not been immune to allegations of bribery. The results reveal that employees in these agencies are collecting bribe money ranging from 5,000 to 7,000 Br.

“The Commission’s strategic focus areas are taxation and revenue collection, the justice sector, procurement in major infrastructural projects, land administration and financial management,” Wedo Atto, the deputy Commissioner, said in his opening remark at the launching of the draft study.

Back in 2012, the second nationwide corruption survey, which was commissioned by the Commission and conducted by a Tanzanian-based US company, Kilimanjaro International Corporation (KIC), disclosed that a considerable number of the public had to make extra payments in the form of gratification to public institutions..

The judiciary, law enforcement community, municipalities and the ERCA were identified as the places most people perceived as being prone to corruption and inefficient public service delivery, according to that survey.

The Commission, nevertheless, wants more than one research to point to similar problems before it takes any measures, says Berhanu Assefa, Director of Ethics Education & Communication Affairs.