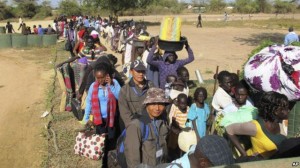 The United Nations High Commissioner for Refugees (UNHCR) has reported that at least 78,000 South Sudanese citizens have crossed into neighboring Uganda, the Democratic Republic of Congo, Ethiopia and Kenya in the aftermath of the ongoing conflict in the world’s youngest nation.

Adrian Edwards, a spokesperson for the UN’s  refugee agency (UNHCR) disclosed that more than half of the civilians fleeing fighting are heading to Uganda and the Democratic Republic Congo (DRC).

“In all, 42,654 mostly women and children, from Nimule in South Sudan, are now in the Ugandan districts of Arua, Adjumani and Kiryandongo,” Edwards said.

“According to colleagues, many men are taking their families to the Ugandan border and leaving them there before returning back to their country. From the refugees we have spoken to we are hearing eye-witness accounts of killings, houses being burnt and shooting,” he added.

About 6,778 South Sudanese citizens are also reported to have arrived in Kenya, according to Edwards.

The UNHCR has also expressed strong concerns about the large presence of children among those fleeing the violence.

The UNHCR’s spokesperson revealed that a joint assessment mission with the UN Children Fund (UNICEF) is currently underway to find out more about the situation, and the needs of the refugee children, including family reunification or foster care for those who are separated or unaccompanied.

Current estimates, according to UNHCR, show that up to 10,000 people may have crossed into West and South Kordofan, two of Sudan volatile states.

“The majorities are nomads and, so far, we have not been able to verify exact numbers due to lack of access,” Edwards observed.

The UN’s refugee body, however, cautioned that more civilians are likely to be displaced as violence continues to rage in parts of South Sudan’s Upper Nile and Jonglei states.

“With fighting still being reported in parts of South Sudan – mainly in the states of Jonglei and Upper Nile – and the slow progress in the political talks in Addis Ababa, we are anticipating further displacement both within and beyond the borders of South Sudan,” said the UNHCR spokesperson.

Meanwhile, the UNHCR has noted that the number of internally displacement people had risen from 200,000 last week to 355,000.

This, it said, had been fueled by the fighting, combined with deteriorating living conditions, including a lack of food in some markets.

This notwithstanding, the UNHCR has revealed that it continues to provide assistance to 230,000 refugees in 10 camps in South Sudan, with the assistance of the World Food Programme and its other partners.