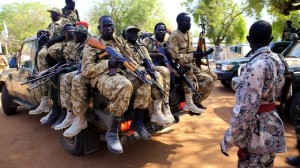 According to reports, a new cease-fire proposal has been presented to both delegations following an outright refusal of the proposal extended last Friday.

Although the peace talks were supposed to have begun about a week ago, both sides only agreed on the agenda of the negotiations late last week. But preconditions for the talks continues to be a source of division.

Over the weekend, a special delegation from the United States and regional representatives failed to convince Reik Machar to accept the current terms of the peace talks.

The disputed terms of the talks includes both sides announcing a cessation of hostilities, the release of about 11 political detainees by the government and the removal of ‘state of emergency’ declarations on Jonglei and Unity states. The rebels are reported to have also called for the withdrawal of Ugandan troops from the country.

Meanwhile, the Inter-Governmental Agency for Development (IGAD) have asked both sides to ease their preconditions to allow the talks progress.

South Sudanese officials are adamant the 11 ex-ministers in custody should stand trial for their involvement in the alleged coup d’état attempt in December last year. But the rebels say they must be freed to take part in the ongoing peace talks.

Several members of the rebellion have since rubbished reports of the coup d’état. According to them, it is simply a ploy by the government to hunt dissenting officials ahead of the nation’s 2015 elections.

Although the United Nations Secretary General Ban Ki Moon revealed he had advised President Kiir to release the detainees, South Sudanese officials are yet to make any move in this regard.

On Monday, South Sudanese army officials revealed a campaign was being launched to free Bor of rebel control.

Military spokesman Philip Aguer earlier confirmed these reports, but failed to disclose any details about the impending attack.

Bor, the capital of Jonglei state, only 200 kilometers north of the nation’s capital Juba, has experienced the brunt of this conflict – with the state changing hands between both sides about three times thus far.

Isolated gun shots rang in the air in Juba earlier today, according to local sources. Forcing many to stay indoors.

The rebels have continued to battle government forces since losing Bentiu to the military last Friday.

Observers say the recapture of Bentiu serves as an important victory for the South Sudanese military, who have admittedly been matched by the rebels.

Lul Ruai Koang, a rebel spokesman, earlier confirmed that attacks had been carried out near Malakal.

Koang further claimed that the rebels are close to taking over the oil-rich city.

On Sunday, over 200 South Sudanese citizens fleeing violence in Malakal are reported to have drowned as their boat capsized on the Nile.

This is not the first accident on the historic river due to the ongoing conflict.

Many other boats carrying escapees are also reported to have capsized in different parts of the nation.

There are allegations that the rebels intentionally attack boats to kill the escaping civilians – forcing many to only travel at night.

It is a perilous but necessary journey for many South Sudanese citizens trapped in the middle of a violent political dispute, which has been fought along ethnic lines.

According to a report by the BBC,  a trip from the east to the west bank of the Nile costs 160 South Sudanese Pounds (about $66).

Unable to generate this sum in the midst of the present chaos, many remain trapped in violent areas. Those who have successfully crossed the Nile relay horrific tales of desperation many of their friends, unable to escape, are being forced to put up with.

The UN has noted that over 1,000 people may have been killed in the conflict thus far, after it was revealed that bodies are strewn across the streets of Bentiu. The organization has also revised the number of displaced persons to over 400,000.

Meanwhile, regional governments remain divided on whether to intervene militarily in the ongoing dispute.

While President Yoweri Musuveni of Uganda has already deployed troops to protect crucial facilities in Juba, other nations such as Ethiopia and Kenya have opted to stay out of the conflict.

Instead, both nations are calling on the government of South Sudan to release the 11 ex-ministers in custody to allow the peace talks begin properly.

Pundits have underscored similarities between Sudan a few years ago and South Sudan currently.

While President Kiir was an active member of the South Sudan Liberation Army, so was his main rival, Reik Machar – as well as many of his followers.

Observers have noted that this violent conflict may continue for a while, given that President Kiir seemingly favors military action over political deliberations to end the dispute.

And despite reports that Machar’s men are facing a lack of supplies, they have expressed their commitment to continue the insurrection.

Photo: South Sudanese soldiers riding on the back of a truck in Bor. (James Akena/Reuters)