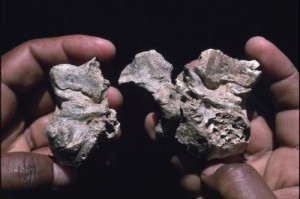 One of the most debated issues in current human origins research focuses on how the 4.4 million-year-old African species ‘Ardipithecus ramidus’ is related to the human lineage.

“Ardi” was an unusual primate; though it possessed a tiny brain and a grasping big toe used for clambering in the trees, it also had small, human-like canine teeth and an upper pelvis modified for bipedal walking on the ground.

According to phys.org, scientists disagree about where this mixture of features positions Ardipithecus ramidus on the tree of human and ape relationship.

Was Ardi an ape with a few human-like features retained from an ancestor near in time (6 and 8 million years ago, according to DNA evidence) to the split between the chimpanzee and human lines? Or was it a true relative of the human line that had yet to shed many signs of its remote tree-dwelling ancestry?

New research led by ASU paleoanthropologist William Kimbel confirms Ardi’s close evolutionary relationship to humans. Kimbel and his collaborators turned to the  base of a beautifully preserved partial cranium of Ardi. Their study revealed a pattern of similarity that links Ardi to Australopithecus and modern humans, but not to apes.

The research appears in the January 6th, 2014, online edition of Proceedings of the National Academy of Science.

White’s field-research team have been recovering fossil remains of Ardipithecus ramidus in the Middle Awash research area, Ethiopia, since the 1990s. The most recent study of the Ardi skull, led by Suwa, was published in Science in 2009.

“Given the very tiny size of the Ardi skull, the similarity of its cranial base to a human’s is astonishing,” says Kimbel.

The cranial base is a valuable resource for studying phylogenetic, or natural evolutionary relationships, because its anatomical complexity and association with the brain, posture, and chewing system have provided numerous opportunities for adaptive evolution over time. The human cranial base, accordingly, differs profoundly from that of apes and other primates

In humans, the structures marking the joint of the spine with the skull are more forwardly located than in apes, the base is shorter from front to back, and the openings on each side for passage of blood vessels and nerves are more widely separated.

These shape differences affect the way the bones are arranged on the skull base such that it is fairly easy to tell apart even isolated fragments of ape and human basicrania.

Ardi’s cranial base shows the distinguishing features that separate humans and Australopithecus from the apes. Kimbel’s earlier research (with collaborator Rak) had shown that these human peculiarities were present in the earliest known Australopithecus skulls by 3.4 million years ago.

The new work expands the catalogue of anatomical similarities linking humans, Australopithecus, and Ardipithecus on the tree of life and shows that the human cranial base pattern is at least a million years older than Lucy’s species, A. afarensis.

Paleoanthropologists generally fall into one of two camps on the cause of evolutionary changes in the human cranial base. Was it the adoption of upright posture and bi-pedality causing a shift in the poise of the head on the vertebral column? If so, does the human-like cranial base of Ar. ramidus confirm post-cranial evidence for partial bi-pedality in this species? Or, do the changes tell us about the shape of the brain (and of the base on which it sits), perhaps an early sign of brain reorganization in the human lineage? Both alternatives will need to be re-evaluated in light of the finding that Ardi does indeed appear to be more closely related to humans than to chimpanzees.

“The Ardi cranial base fills some important gaps in our understanding of human evolution above the neck,” adds Kimbel. “But it opens up a host of new questions…just as it should!”