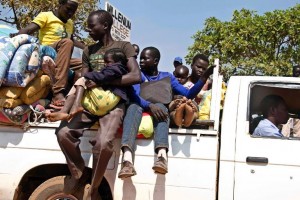 It is estimated that around 2,500 South Sudanese are crossing into Uganda each day.

Since the fighting broke out in South Sudan, 189,000 people have been displaced in the country and 25,000 have crossed into neighboring countries, according to the United Nations.

The organization predicts that up to 400,000 people could be displaced if the fighting continues.

The URCS revealed that Uganda has taken the biggest share of refugees from neighboring South Sudan.

The communications director for URCS, Ntabadde Makumbi, told reporters that the number of refugees from South Sudan is expected to reach 30,000 soon.

According to him, this necessitates the opening of other camps, as the current camps are almost full. To this end, two sites are reportedly being set up in Adjumani dsitrict, northern Uganda. And on their completion, Uganda will be able to accept up to 50,000 refugees.

Currently, Uganda has three refugee camps; Dzaipi transit camp has the larger portion of refugees, about 16,265. While the Elegu Border and Arua camps have 3,500 and 4,700 refugees respectively, the director said.

Recently, the UNHCR reported that new arrivals compound difficulties for the Uganda, who is already dealing with an influx of refugees from the Democratic Republic of the Congo.

Ethiopia and Kenya were identified as the other favored destinations for South Sudanese refugees, although the numbers heading for these nations were relatively small. Around 5,300 refugees have been registered in Ethiopia, while in Kenya, about 300 South Sudanese are arriving daily.

In Sudan, the UNHCR said it will continue to supply services to about 230,000 refugees at 10 refugee camps in South Sudan – while it is also taking on increased responsibilities for the 57,000 civilians in UN compounds throughout the country.

Women and Children have been given priority, according to reports. Making sure all the refugees have access to water and health care services is one of the biggest responsibilities, according to UNHCR. With the collaboration of the World Food Program, the distribution of food rations for the refugees is expected to improve.

During his visit to South Sudan on Monday, the President of Sudan Omar al-Bashir said “We have come to see what we can do to stop this war knowing all too well that armed conflict would never resolve a problem and also knowing that any problem no matter how complicated can be solved at the negotiation table,”

Despite the president’s speech about the need for peace, the UNCHR says there are concerns the fighting would affect refugees, since the opposition forces are now in control of Bor, the capital of Jonglei — which has a large number of civilians.

In a bid to protect civilians, the government is reported to have deployed a contingent  to Pariang – close to both the Yida and Ajuong Thok refugee camps.