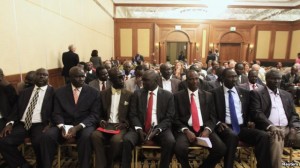 The South Sudanese government and representatives of rebel forces met for the formal opening of peace talks on Saturday evening in Ethiopia, part of the diplomatic effort to halt weeks of fighting in the young nation.

The New York Times had reported that the two delegations met separately with mediators at a hotel in Addis Ababa to pin down their negotiation points. Both sides then gathered with Ethiopia’s foreign minister for a ceremony to mark the official start of the talks.

“The inaugural ceremony was conducted today, and we will continue with the talks themselves on Sunday,” said Dina Mufti, spokesman for Ethiopia’s Foreign Ministry. He also noted that the preliminary negotiations had been “productive.”

The urgency of the talks was evident as gunfire rattled the nerves of residents in Juba on Saturday evening after weeks of relative calm in the city. A senior western diplomat described sustained fighting around the Juba military hospital and the national security staff compound. The shooting ended after about 20 minutes and did not appear to signal that rebel forces had reached the city.

It was unclear whether some members of the armed opposition might have been involved in the shooting, which occurred after curfew. According to experts, the shooting is likely to fuel the growing unease and uncertainty in the capital after rebels recaptured the strategic town of Bor last week.

Reports that the United States would be evacuating most of its staff has added to the anxiety among residents in Juba, who fear an attack is imminent. The United States on Friday flew more of its staff out of the country, announcing that it would no longer offer consular services to citizens, but that top diplomats would remain.

Secretary of State John Kerry said on Sunday that the beginning of direct talks to end bitter fighting in South Sudan was an important first step in restoring peace to the young nation. He cautioned that the United States would mobilize international pressure against both factions if they do not negotiate in good faith.

Speaking during a visit to Jerusalem, Mr. Kerry said: “The negotiations have to be serious. They cannot be a delay gimmick in order to continue the fighting and try to find advantage on the ground at the expense of the people of South Sudan. They have to be credible talks.

“The United States will support those who seek peace,” he added. “But we will deny support and we will work to apply international pressure to any elements that attempt to use force to seize power. That is not acceptable.”

Mr. Kerry noted that the two sides “need to push their people to come to the table here. The fighting must end.”

The power struggle quickly descended into ethnic clashes in which hundreds of civilians are reported to have been killed.

Mr. Kiir is a Dinka — the Dinka are the country’s largest ethnic group — while Mr. Machar is a Nuer. The dispute between both men has seen these two ethnic groups face-off violently.

According to a statement released on Saturday by the Intergovernmental Authority on Development (IGAD),  the negotiations will focus on the cessation of hostilities and the release of the prisoners arrested in the wake of the alleged coup.

Humanitarian aid workers have warned that hundreds of thousands of people displaced by the violence were in dire need of help and could not wait for a cease-fire. They said aid was needed immediately for civilians at United Nations bases in Juba, Malakal and Bor, the scene of fierce fighting in recent days, as well as many hiding in the bush or camped out across the White Nile from Bor.

According to Toby Lanzer, the United Nations humanitarian coordinator for South Sudan, 30,000 people are now at the group’s bases in Juba alone.

The United Nations also said in a statement that it was reinforcing its positions in South Sudan. “This includes police, military, logistics support and selected numbers of civilian staff who are needed at this time,” the statement said.

The United Nations mission in South Sudan denied news media reports claiming that it had said rebels were advancing on Juba. “No U.N. official has made such a statement to the press,” the group said.

South Sudan gained independence from Sudan in 2011 after decades of a bloody civil war that claimed the lives of about two million people. More than a thousand have been killed in this conflict already, according to the United Nations, but analysts say that number is likely much higher.