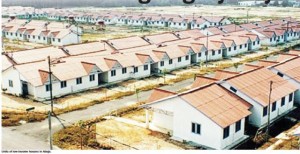 High population growth, environmental degradation and political conditions are some of the main factors that are reported to escalate the housing problem in the continent.

A research conducted by the International Housing Coalition indicated that people are moving the cities at unprecedented rates, and Africa will be more urban than rural by 2030. It was also revealed that in the next 25 years, African cities will have to accommodate more than 300 million new residents.

This year Nigerian President Goodluck Jonathan says his government will create more than 200,000 affordable mortgages over five years and introduce rent-to-own options for low-income housing to address a massive shortage in Africa’s most populous nation. In 2010, UN- Habitat reported that Nigerian slum population came down from 75 per cent of all urban residents in 1990 to 61.9 per cent in 2010.

In South Africa, the proportion dropped from 46.2 per cent to 28.7 per cent during the same period. Ghana, Senegal and Uganda have also made steady progress, reducing their slum populations by up to 20 per cent. It was also found on the report that countries such as Egypt, Libya and Morocco have “nearly halved their total number of urban slum dwellers, and Tunisia has eradicated them completely.” This was seen as a progress in achieving the “cities without slums” Plan.

The UN-Habitat estimated that, 200 million people in sub-Saharan Africa were living in slums in 2010, or 61.7 per cent of the region’s urban population, the highest rate in the world. North Africa had another 12 million slum dwellers; that was just 13.3 per cent of its urban residents, the lowest rate in the developing world. In Zambia, 74% of urban dwellers live in slums; in Nigeria, 80%; in Sudan, 85.7%; in Tanzania, 92.1%; in Madagascar 92.9%; and in Ethiopia, a staggering 99.4%

The major constraints in providing housing and related infrastructure in Africa are said to be, policy and institutional constraints, such as lack of priority to housing, limited role of the private sector, high construction cost, Shortage of land for housing. Besides that lack of formal sectors of financing in many African countries is hindering the progress of reducing the problem.

It is repeatedly mentioned that if nothing is done regarding the situation, to better manage the inevitable urban growth and to increase the relative “productivity” of its cities, Africa risks becoming even more marginalized in the global economy.