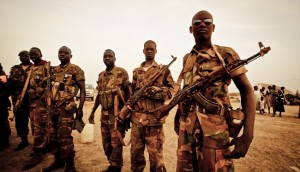 The two-week old violence in South Sudan has escalated over the past few hours as reports emerge that about 25,000 rebels are marching to the capital, Juba.

The 25,000 young men are from a tribal group called the “White Army.” The army is reportedly marching in support of Riek Machar, who has been identified as the aggrieved second party in this raging dispute.

According to the Guardian Express, the rebel army is made up of men from the Nuer ethnic group, who in the past have threatened to exterminate another ethnic group in South Sudan.The announcement of the impending siege has undoubtedly revoked the cease-fire announced by officials.

The leader of the rebels, ousted Vice President Machar, has stated that there will be no ceasefire until all parties are represented in negotiations and that preconditions had been met. One such precondition is the release of Machar’s political supporters who have been jailed.

Information Minister Michael Makuei Lueth reported that forces are positioned outside the capital of South Sudan, and are awaiting the “White Army” to arrive. The army is last reported to have been sighted about 30 miles from Bor. The capital of Jonglei, which fell into the hands of the rebel early in the conflict but was re-taken by government forces within a few days.

South Sudan is now bracing for some of the worst fighting yet. There are concerns that the admittedly stretched UN peacekeepers may not be able to properly protect civilians in dangerous areas.

There is great concern for collateral damage in this conflict. The rebel group have already shown signs of fighting along ethnic lines. Earlier in the conflict about 2,000 tribal Nuer attacked the U.N. base in Akobo, killing three U.N. troops and dozens of ethnic Dinka.

The UN has reported that hundreds of civilians have been displaced or killed, while thousands have sought protection at secure UN compounds in the war torn nation. Toby Lanzer, head of humanitarian operations in South Sudan, gives a conservative estimate of 120,000 displaced citizens. Lanzer reported to the BBC that while touring the local hospitals he saw thousands of injured citizens.

What began as struggle between two political figures, Machar and Kiir, has now escalated into a violent conflict, threatening to destabilise the young nation. Meanwhile, Machar’s sight seems to be firmly set on political power. The rebel army are reported to have targeted the two states with the most valuable oil production–showing their intent of crippling the current regime.

Machar’s General, James Koang Chuo, has stated that his military forces have taken over and effectively shut down oil production in Unity state and other Upper Nile states. However, the Sudan Tribune reports that the shutdown was the direct result of workers leaving the fields, as a result there were now no persons with technical expertise to operate the machinery and production sites.