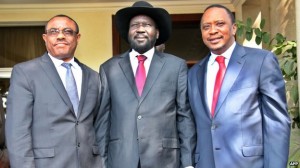 Members of the International Governmental Authority on Development (IGAD) are meeting in Nairobi today to find a solution to the outbreak of violence in South Sudan, which has left thousands dead and many more displaced as fighting continues to spread.

IGAD, a trading bloc made up of 8 eastern African countries including South Sudan, is reported to have dispatched a delegation to South Sudan earlier in the week to meet with the parties involved in the ongoing conflict prior to this meeting.

Brazille Musumba, IGAD’s Secretariat Communications and Media Advisor told the press that a communique of the meeting “should be expected later.”

This meeting is only one of several attempts by individuals, governments and organizations across the world to bring an end to violence in the relatively young nation, which has lasted for almost two weeks now.

Earlier in the week, President Hailemariam Desalegn of Ethiopia and President Uhuru Kenyatta of Kenya travelled to South Sudan to meet with President Kiir and other parties caught in the dispute. Despite reports that fighting was ongoing during the meeting on Thursday, the Ethiopian Foreign Minister Tedros Adhanom, who accompanied President Desalegn on the trip, has revealed that the discussions were “very constructive and frank.”

Among other things, the trio are reported to have discussed calling a ceasefire to the current fighting, releasing political detainees,opening dialogue between the opposing parties and protecting the civilian population of the young nation.

United Nations (UN) officials say up to 120,000 people may have been displaced by the violence thus far, according to a report by The Statesman.

On Tuesday, the UN Security Council voted to virtually double the number of peacekeeping forces in South Sudan after reports emerged that UN staff and facilities had come under attack.

Hilde Johnson, head of the UN Mission to South Sudan (UNMISS) said the organisation is working round the clock to ensure much needed supplies and reinforcements are delivered within 48 hours. She revealed that the UNMISS was caught off guard by the sudden outbreak of violence in South Sudan, adding that up to 50,000 civilians are currently seeking protection in UN compounds across the nation. According to her, supplies are urgently needed as the UNMISS forces are currently overstretched, making it difficult for them to function effectively.

On Tuesday, a UN compound in Bor is reported to have been hit with a mortar amidst raging clashes between troops loyal to President Salva Kiir and those loyal to his opponent and former deputy Reik Machar. According to a report by EuroNews, the UN compound was housing several South Korean peacekeeping forces, but only 4 Nepalese soldiers were injured in the explosion.

Since Bor was wrestled from the control of renegade soldiers on Tuesday, several residents say calm has been restored to the streets of the city, which was almost suddenly thrown into a state of anarchy last week.

UNMISS spokesman Col. Michael Chadwick told the BBC that Bor has been much safer since it was reclaimed from rebel Nuer soldiers.

While the authorities have been able to bring the situation in Bor under control, things have been falling into chaos elsewhere. Fighting is reported to have erupted in two oil rich locations, Bentiu and Malakal, this week. Spokesman for the South Sudanese army Philip Aguer recently revealed that rebel soldiers had even seized a number of oil wells in Upper Nile State.

Pundits say the continued violence in South Sudan is likely to be one of the main factors influencing the rise in oil prices. If the fighting continues, many commentators have noted that oil prices could easily exceed $100 per barrel.

Meanwhile, China and the European Union are set to dispatch envoys to South Sudan in an attempt to kick start negotiations between President Kiir and his rival. While President Kiir has sounded his willingness to open dialogue, Reik Machar recently set a precondition for dialogue—that all his arrested colleagues be released.

At least 11 ex-South Sudanese state officials were arrested in the aftermath of what the government described as an attempted coup d’etat last week.

Fighting broke out in Juba on Sunday December 15th, after a lone gunshot was heard during a conference by the leading party, Sudan People’s Liberation Movement (SPLM). Renegade soldiers loyal to Reik Machar, who is a Nuer, clashed with soldiers loyal to the sitting President, who happens to come from the Dinka ethnic group.

The eventual spread of the violence throughout the nation has seen Nuer and Dinka soldiers and civilians clash, with fatal outcome. Several army generals from the Nuer ethnic group are reported to have defected in support of Reik Machar.

Meanwhile, numerous state officials have called on the parties involved in the conflict in South Sudan to prevent the dispute from devolving into full blown tribal war.

There are reports that President Kiir and Reik Machar are set to begin direct negotiations in Addis Ababa next week Tuesday. However, there have been no official confirmation of this report.

Amidst fears that the legal government of South Sudan is being subverted, the U.S. government have said it will cut aid to the young nation if President Kiir is toppled.

Caught in the middle of this bloody dispute, many civilians are reported to have largely hid indoors or in the bush in Bor, Juba and other cities since violence erupted last week. Uncertainty looms over South Sudan, and many can only hope the scheduled negotiations will carve a way out of the current status quo.